The international E-road network is a numbering system for roads in Europe developed by the United Nations Economic Commission for Europe (UNECE). The network is numbered from E 1 up and its roads cross national borders. It also reaches Central Asian countries like Kyrgyzstan, since they are members of the UNECE.

West-East roads have even numbers and North-South roads have odd numbers. 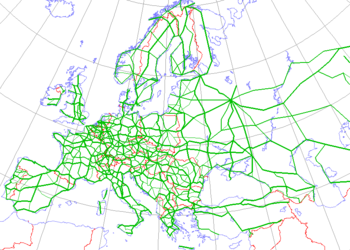