Moscow (Russian: Москва, Moskva) is the capital and largest city of the Russian Federation.

From metro station Речной Вокзал (Rechnoy Vokzal; green line) take bus #851 towards Шереметьево (Sheremetyevo). It's approx. 3 km from the metro station towards the Moscow Ring Road. You can get out at the bus stop just behind the interjection with the MKAD and start hitchhiking. Huge traffic, try to pick out a ride towards Tver at least. The bus drives along the M 10 through Химки (Khimki). Get out when the bus turns towards Sheremetyevo.

Take an elektrichka (local train) from Yaroslavsky train station. A possible, but probably far from the best, hitchhiking spot can be reached if you get off at Zelenogradskiy station. 20 mins (2.5 km) walk to the motorway, plus you need to cross it (+ 5-10 mins depending on the traffic). 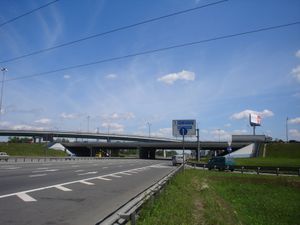 The Hitchhiking spot (behind the bridge) in direction Vladimir

Take the metro to the station Shosse Entuziastov (Шоссе Энтузиастов). From there, walk up to the main street and you'll directly be at the bus stop. Here, take bus #702 or #214 to Southern Izmaylovo (южное Измайлово). Get out at the last stop. Here you can already hear the motorway, though it's a bit difficult to find it in first place. Walk back in south-eastern direction until you'll find a McDonalds restaurant. This is directy located at the motorway junction of the ring. Walk for around 150m east down under the bridge until you find a good spot to start hitchhiking. Additionally, you can also walk 300m further until the petrol station and start hitchhiking on the hard shoulder just behind it. Traffic here is huge.

Take the purple metro line (Tagensko-Krasnopresnenskaia) until "Kotelniki", the last station. Here you can easily walk go to the "Novoryazanskoe shossee"/M5, which is perpendicular to the street you arrived with the metro. The cross is a bridge, so you can get on it by stairs and start hitchhiking or walking some hundred of meters to get more ride. You are out from the MKAD-circle, but not from the moscow urban area : don't hesitate to get ride of 20 or 30 kms at the begining.

Take the metro to the station Yugo-Zapadnaya and then take bus #707 or #611 to the stop Dudkino. You can hitchhike directly from the bus stop. This is the motorway Kievskoe shosse that goes all the way to Kyiv. Soon the motorway becomes a simple two-lane road, so that even if your driver must drop you off only after a few dozen kilometres, you can simply remain beside the road and soon get another lift onward.

Other possibility is to take a train (elektrichka) to a small town Aprelevka (look at the map) - it is directly situated on the M 3 motorway Moscow/Kiev. Just walk 1 km to the motorway (ask people about the direction). However, cars here move fast.

Take the metro to the station Annino (Аннино), it's situated on Varshavskoe Shosse (Варшавское шоссе). From there, walk towards MKAD and Simferopolskoe Shosse (Симферопольское шоссе), get out of the city through the traffic interchange on the intersection of MKAD and Varshavskoe Shosse, and then keep direction to M2 (Simferopolskoe Shosse) and walk approx. 2 km to the city line. There is a convenient spot at the roadside right before railway bridge where cars slow down. All cars there move strictly by M2.

First of all you need to take metro line 6 (yellow line) to the station Teply Stan in the direction of Bittsevskyj Park. Then exit through the first exit to the right and just there you have the bus stop of the bus 37 and the marszrutka 37M. You can take either of them. They both enter the Moscow Ring (it's a 6 lanes road with lots of traffic, it would be really hard to miss). The bus exit back to the city and then comes back to the ring and there after it comes back you should get out on the first stop. With marszrutka you just have to look for the signs for M4 (it will be saying M4 650m to the right). When you exit just follow the signs and the road till you find a BP Gas Station. Hitch - hiking from there is easy.

Тake bus #127 from metro Молодёжная (Molodyozhnaya; blue line) towards Pублево (Rublevo) to the very last stop. Continue to walk straight along Улица Василия Ботылёва (Ulitsa Vasiliya Botylyova) for about 500m. You will find yourself just in front of the M9 motorway now. You will see that there is a noise protection wall, but it is possible to walk to the left behind the bridge, and after some meters you can climb up the hill up to the motorway. There's plenty of space on the hard shoulder to stop cars. Most traffic might only go to the next villages, so make sure to get a ride at least 30-50 km further out of the suburbs of Moscow.

Compared to the european cities, Moscow is a far easier city to find open wi-fi signal. For an easy solution, many metro lines have public open wifi inside the trains (but not at the platforms).

If you need also a power plug to charge your cellphone or computer, there are at least two good options:

1) "Gorky Park" in the center (stations "Park Kultury" or "Oktyabrskaya"), coming from the central door and passing the big fountains, they have an area with wooden cubes and power plugs on it; if not avaliable, there are other few plugs around the park. All the park is also covered by open wifi (the connection lasts for 30 minutes but you can renew it indefinitely just refreshing the page).

2) State Library (Biblioteca imeni Lenina) (in the center, homonymus metro station). It works on week days from 9 to 20 and on Saturdays from 9 to 19. There are big, comfortable study rooms inside it where you can plug your computer. To enter on it you need either a one-way card (free) or a 5 years subscription (which costs you 100 rbl. -- as of Oct 2014 -- for making the card with your name, photo etc). For making both, you need only your passport. However, to have a password to access the library's WiFi you will need the 5 years subscription.

3) University buildings are usually good places for it but not in Russia; in general you cannot enter in the buildings unless you are a student or a functionary of it.