There are several options to hitch out of Warsaw in western direction, and the option you choose depends on your location in the city and your personal preferences.

Ride a train to railway station Brwinów. When you walk down the stairs of the platform turn right and walk direction north. The road is first called Rynek, later Biskupica, and the road number is 720. Keep following it until you pass the A2 with a tunnel, then take the first road left and follow it until the service station. The distance to walk is about 3.5 km. Google maps link here

This option is best when you have to get from the northern districts of the city to a good spot. There's no walking involved, you'll be able to get out of the bus and start hitching right away!

Take bus 103, 122, 180, 186 or 409 and get off at Gen. Maczka (Note: bus stops only on request here!). Hitch right from the bus stop where bus 186 in direction Szczęśliwice stops. Holding a sign A2 makes the difference to get the ride out. The S8 starts here and eventually changes into the A2 to Poznań. Streetview here. (I used this spot in July 2018 and absolutely the best spot it is for Poznan. just waited 3 min and even the driver told me how convenient spot it was.)

Option #5: The old road / longer traveling time since you cross many villages A good place to hitch from near the bus stop Dzierżoniowska(you need to press STOP for that busstop). To get here, either take bus 114 from metro Młociny in the direction Młociny-UKSW, or take bus 181 from the metro station Plac Wilson in the direction Cmentarz Północny. Once you get off the bus at Dzierżoniowska, you can see the main road going north and there are several places to stand Best is traficlights next to McDonald). Best stops betwen Warsaw - Olsztyn :(dont agree for Płońsk) Glinojeck (on roundbound), Mława, Nidzica (on trafic lights cross),

Option #2 - Also you can get out from bus 738 at bus stop Cmentarz and walk back and a bit forward on road 8 / 629 towards Bialystok after some disctance this road joins a S8 highway. Also there are some small lakes and nice place to camp overnight

Wild camping with tents next to Vysla river and not far from Central bus station/railway - go to Świętokrzyski Bridge cross it and turn left on the first road Wybrzeże Szczecińskie. Walk one minute and you will spot downhill to side of river with the flat land and small hill with big tree camp on opposite side of the tree. Thats nice place noone see you from the road above. Also its on the other side of bus station Most Świętokrzyski 03 (buses 102, 162, N14, N64 stops here)

Also a Vistula riverbank there looks promising for tent camping 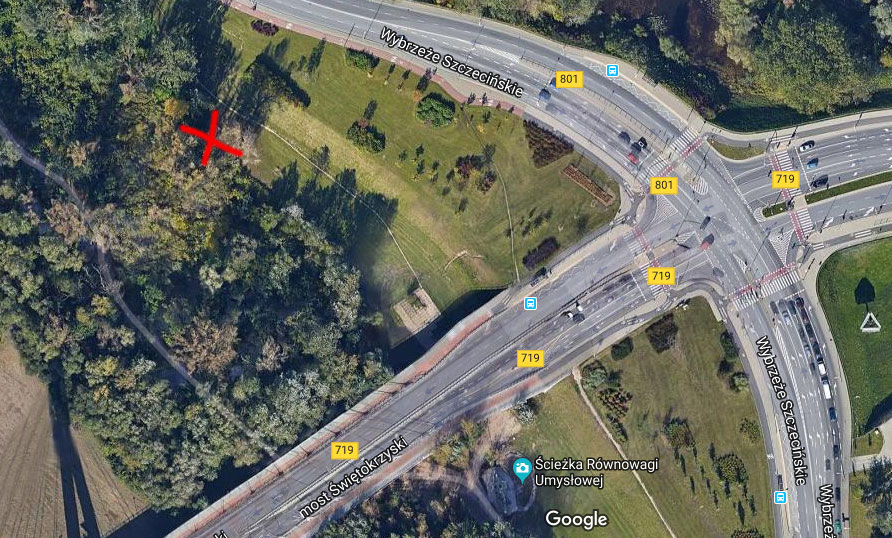