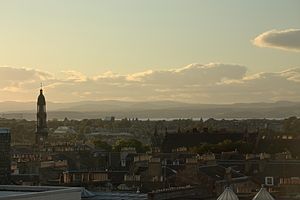 It is better to get dropped at the Ratho Station and then walk about 5-7 minutes ahead until a roundabout and a BP Petrol station with Mac Donalds appears. Round about is before the petrol station that has Mac Donalds. Here on the left od roundabout, is the M8 going to Glasgow. If you turn left walk about 100 meters and then stand with a sign saying Glasgow drivers will find it easy to see you and even STOP for you. Do not stand too close to the turn, else it is difficult for them to notice you in a second and stop for you, while looking out for cars coming from behind.

To get on the A68, get a bus until Dalkeith (village south of Edinburgh), ask to drop off in the city center, then get or ask for Newmills road, pass the little river and get Lauder road, pass a traffic light and after, you get to a roundabout that takes you in direction of Lauder, Jedburgh, there is place for cars to stop. Do not walk past this roundabout, there is no good spot further on! You can get to this roundabout easily from the centre of Edinburgh on bus 3 or 33. get off at "Primrose Tce, Dalkeith" or maybe at "Hepburn Rd, Dalkeith which is closer but i am sure i didnt see this stop as i walked past.

For Galashiels ( or the A7 ) best if to catch the bus number 29 from The North Bridge in the direction of Dalkeith. Your station to goto is called Eskbank at Tesco ( Dalkeith ). Tesco is a huge shopping center with a bus stop where Bus No. 29 goes directly while bus number 40 goes after going through the whole town of Dalkeith. Right next to this huge store is a petrol station , get out of here and then is the A7 national road ( historic road ) towards Galashiels. Just walk down here atleast 100 meters away from the circle with a sign and there is plenty of space for cars to stop.

There has been some success getting on the A1 from Tranent: a safer bet is to take the bus 44c from st.Andrews square to Musselburgh, get off before the crossing of the River Esk, and walk south along the river towards the A1. There is a service station there: on occasion rides also go from there down the M74 (GB) and the A68.

To get on the A1 from Tranent is pretty easy: take the bus number 26 that says Tranent on it, from the centre, it goes through Portobello and Musselburgh in case you're located there. Get off the bus after 30-40 min, ask the driver for the last stop before the bus crosses the A1. Walk alongside the road there and go left on the roundabout and you're already on the sliproad to the A1. You can try it on the road onto it, cause cars are going more slowly, or you just walk til the end of the sliproad and you find the first layby just about a few metres further on, you can see it as you walk along from further away. Here you can get the cars from both directions.

To get on the A702 you need to get to the Esso petrol station at Hillend. Take bus #4 from the city and get off at the first stop after the bus goes over the Edinburgh ring road. It's easy for cars to pull in outside the petrol station, and a busy road. You could also ask drivers at the petrol station. Some anonymous hitchhiker hitched here twice. First time took 10 mins, second took about 50. Probably be quicker for a girl. As an Edinburgh local and someone who has hitchhiked from Edinburgh before I completely agree with this. One piece of advice though - make sure that the person picking you up is going a reasonable distance as you do not want to get stranded somewhere in the Boarders of Scotland (it can be pretty remote)! You get people going almost going as far as London/Dover for work/holidays as the A702 eventually leads onto the M74 (GB).