Porto is the second biggest city of Portugal.

For the airport of Porto, check out the Francisco de Sá Carneiro article.

Hitching South is very easy, especially when you start from within the nearby city of Vila Nova de Gaia, which is just across the Douro River. One spot in Gaia is a roundabout, next to the last metro stop (Santo Ovídio). This is an okay spot to stand, even at night, for going to both towards the north Porto and above as well as going south (but it is definitely easier to get a ride to the north there). It is better if you stare down the highway which points towards A1 Highway going to Lisbon and turning right to Porto and North, there is a small red light and stand there if you want to head back to Porto and North. 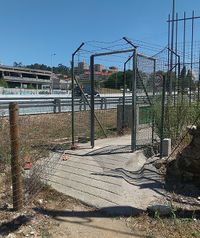 There is a petrol station on the A1 highway just after the ramp which is excellent for rides to the south. Get to the last stop of the metro line D called Santo Ovídio. Walk south down Rua de Soares dos Reis (N1) and continue walking when it becomes the Rue Fonte dos Arrependidos. Pass under the highway through the tunnel and keep walking on the Rua Alto das Terras. After a few hundred meters you will see the petrol station on your left. Should take ~15 minutes, mostly downhill and in the shade. Walk the dirt road full of garbage to the left till you find fenced tunnel (pictured) that leads to door to the station with a doorbell you can ring so the staff will come and let you in. They're fine with coming to open it.

As of May 2019 the doorbell is broken, but if you happen to have a mobile phone with you, you can call them at +351 22 712 6842 and they will open the door for you (it's really work!). In case you don't have a working sim card, you can probably shout to attract attention and have them come over. Failing that, it's also easy to get to the petrol station for someone that is ok with a "short moment of illegality": after the tunnel you can climb to your left side and then walk along the highway for some meters to the petrol station. Otherwise it's also possible to climb over the gas station fence. A special tip, after the tunnel keep looking on your left side, you can find a lot of wild strawberries (in Summer, of course).

The following service station on the A1 is called Antuã-Estarreja. Anyone who is going in the direction of Aveiro but not to Lisbon can drop you off here, where there will be plenty off cars almost all bound straight for Lisbon.

The route to France

For people trying to go from Porto and enter France as fast as possible. Go to the second Gas station, get lift in the direction of Viseu and then get dropped at any petrol station and then look out for cars and Portugese trucks which are going to France or cars that are from Belgium or Netherlands. Be patient and ensure you do not get down anywhere else but only petrol stations; don't go with drivers to their city center or you will get stuck. Near border of Spain before the border if you are at a gas station, wait until you find a car or truck that goes all the way to Saint Sebastian, a Spanish town on the French border. You will have to be patient and you will definitely find with a little time and patience. Try to get a direct ride to France ( so that you can skip Spain) which is a disaster for long distance hitchhiking.

Start from the petrol station near "Vila nova de Gaia".

Take the Tram/Train to São Frutuoso‎ (less than 2 Euro). Walk the Rua Prof. Antonio Marques until the end and you'll arrive at a petrol station right next to the motorway to Vigo/Spain after appx 800m. Note: There is a fence around the whole petrol station, almost impossible to climb. To ring the bell and ask for entrance is a bad idea. Walk along the fence until the bridge where it's easy to climb over (January 2012). Try to be unwatched climbing the fence, the petrol station is privatized. I got kicked out in January 2012...In February 2012 I got dropped off on the other side direction Lisbon and had no problem at all staying at the petrol station. Just make sure they don't see you enter the petrol station "illegally".--Wukk 18:14, 28 February 2012 (CET)

You may hitch from the petrol station close to metro station "Estadio do mar". At the roundabout, take Av. Calouste Gulbenkian, pass the School of design and you will see an entrance to coastal motorway A28 going North. People might also be going North using other motorways from there since there is a junction heading East close by.

There are probably many other ways of leaving Porto in that direction, yet to be discovered and shared.

Me and my travel-buddy tried the petrol station close to the metro station "Estadio do mar", but couldn't get a ride after trying for one hour. Some people at the petrol station told us about a FREE shuttle bus (free bus shuttle – MAR Lines – ended its operation in July 31st 2017 ) going north to IKEA (located close to the motorway A28) where a lot of spanish people go for shopping. The best way to get to the bus-station for the free shuttle-bus is to take the metro to "Senhora da Hora" (one stop before "Estadio do mar"), walk back (if you took the metro from the city) on the street along the metro-line, take a right into the street called "Avenida de António Domingues dos Santos / Rua da Barranha" and find a bus-station on the right side. This is how it looks like:

Take the red bus to "Mar Shopping" and get off there. We were standing at the exit of the parking-lot of IKEA and got a ride to "Viana do Castelo" after 15 minutes. This is how the mall and the bus look like:

The free shuttle-bus runs every 1,5 hours. The IKEA is open Monday to Saturday 10h-23h and Sunday/Holidays 10h-20h. I assume those times the shuttle bus runs aswell. Should it not run you can walk down "Avenida de António Domingues dos Santos / Rua da Barranha" from the bus-station to the metro station "Estadio do mar" in a few minutes and follow the descriptions above.

The second petrol station on the A4 motorway is a good spot to catch a ride East. You can get there

By Metro (1,50€ from center)
Take the metro line F (direction FANZERES) and get out at CAMPAÍNHA (not to be confused with Campanhã!). From there you can walk:

The walk takes about 30min (fast walking) and to enter the petrol station you can easily jump the fence if you follow it from the gate to the left.

By Train (1,40€ from center)
For a shorter walk, take a train going to Braga, Guimarães, or Marco/Caíde (green, red, or blue line) from "S. Bento" or "Campanhã", and get off at "Águas Santas/Palmilheira".

ATTENTION: There are only 3 other petrol stations on this motorway (check Wikipedia for update), one just after Penafiel, the next one near Lamares after Villa Real, and the last just before Mirandela, so if you stay on the petrol station above, ask drivers going to Vila Real to leave you on Penafiel's petrol Station, from there it's pretty easy to get a hitch to Amarante and Vila Real.

If you continue East a little more, nearing the last white bridge and opposite the beach there are a few empty fields, again between the lower road and the town above. Locals pass through these fields, but it would be easy to spend the night without being bothered.

Another good option is to pitch a tent or just sleep in the bushes in the biggest park of Porto - Parque de Cidade. It's located quite far from the center, but in a very nice area near the ocean. Park is huge and there are a lot of good places with bushes and trees for a tent. In the center of this park there is a large public WC which has free hot showers. It is a large round concrete building with ivy growing all around it, you can't miss it! Only open during the day. There is good transport connection with the city center, or just follow Avenida da Boavista, it takes 60-80 minutes on foot from the center..

Porto center streets can be a bit scary at night, if you need to sleep well and safe the airport is your best option. It is warm and safe and you can blackride the metro from the center to there in about 30 minutes and return the next morning to the city.

Camping There is a lot of campings near "Praia de Madalena". It is close to the city centre, you just have to take the bus number 906. A place costs 6 euro per night.

Food is very cheap in Portugal, you can have a dinner for 3.5 euro.

During Livediverse's stay in Porto, he got this recommendations for cheap vegan food:

You can also eat in some another places which serve organic food like Quintal Bioshop. There is also a place called Suribachi which serves macrobiotic food.