Hitching at the Prins Bernhardplein liftplaats

Amsterdam is the capital of the Netherlands.

Coming from South there is a petrol station just a couple of kilometres before Amsterdam. There are enough people stopping before going into the city. So get off there when your driver doesn't go where you need to be in Amsterdam and catch easily a ride that goes to the district you want to go - this will save you some bugs and 30-60 minutes getting to the other side of town.

There is an official liftplaats about 100 meters south of metro station Sloterdijk on Haarlemmerweg. Here you will find a lot of traffic going straight to Haarlem, and possibly even cars going to Leiden, and further to Delft and Den Haag. Though, most cars going there will use the Ring A10 and then the A4 to Den Haag.

There is an A10 on-ramp near Sloterdijk station. Exit the station and go 200m east on Hatostraat, 250m north on La Guardiaweg and 250m east on Basisweg and then cross over to the on-ramp.

Another ramp is a little way up the street from the last. Get there from the last by continuing further down Basisweg (which becomes Transformatorweg until Kabelweg). Follow this north past s101 (Nieuwe Hemweg). The ramp is off of Vlothavenweg.

If you are hitching in the direction of Berlin or Hamburg, you might find the route-page from Amsterdam to Berlin useful.

If you are hitching in the direction of Bremen, Hamburg or Copenhagen, you might find this route-page from Amsterdam to Copenhagen useful. 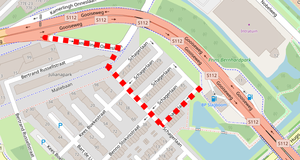 The walking route from the former liftplaats location to the nearby petrol station.

There is a liftplaats, a spot specifically for hitchhiking, at the Gooiseweg next to the Prins Bernhardplein situated before NS Station Amsterdam Amstel (pass the bus stop). This road leads to the ramp of the S112 of the A10, the motorway around Amsterdam (direction A1 and A2. This is currently being turned into a third lane and is completely unusually for hitching a ride. A little further on that road, which is called Gooiseweg, and behind the bend you will find a BP petrol-station where you can talk to drivers, often a better way for getting a ride. The petrol station is easily accessible from the backstreets, and it is very easy to hail a ride from the side of the road immediately after the petrol station.

Most cars here will drive along the A1 towards Amersfoort, Hengelo and Germany. The first petrol-station is just 8 kilometres further, just after Muiden] A second petrol station and parkingspot, called De Slaag, is located 37 kilometres from Amsterdam, right before Amersfoort.

Step out at P+R Terrein in Muiden, walk south Weesperweg for 200m, then turn left crossing the canal with the bridge Spieringburg/Mariahoeveweg for 200m, then 400m south along the Vecht canal eastbank on Lange Muiderweg. Now comes the unverified part: walk 800 meter east behind the noise breaker along the motorway and you will be at A1 BP-service station Honswijck.

Hitchhikers at the Prins Bernhardplein liftplaats

There is often a lot of competition at the liftplaats and drivers usually only go short distances, so by the time you have finally left Holland you will have had approx. 3–6 rides. You can easily avoid this by taking a train to Hengelo (buy a discount ticket). From the train station Hengelo take bus 14 to Bruninkshoek. You now find yourself on the street Oostelijke Esweg. Walk in the direction the bus just came from towards the street Hasselerbaan, then turn left. Walk down until you cross Oldenzaalsestraat. Turn left and you will see a footbridge overlooking the A1. When you have crossed the bridge, don't turn right but walk through the grass and descend down. Turn left before the ditch and walk with the ditch on your right. Continue until you see a little forest; here you have to jump over a small ditch. Walk through the little forest and you will reach an Hush AVIA petrol station where nearly all cars go to Germany.

You can either go and hitch from the same spot as for going West at the Amstel Station, or hitch from where the motorway to Utrecht starts, which is called the Utrechtsebrug. This second option definitely gives you more cars going into the right direction and generally a lot less waiting time.

Head to the Martin Luther King Park in Amsterdam Zuid where the motorway to A2-motorway starts, which leads to Utrecht and further to Den Bosch, Eindhoven and Maastricht. Take tram 4 or 12 and walk from the Vrijheidslaan south through the Rijnstraat to the motorway A10 / A2. At the end of this road before the crossing, you'll find traffic lights where you can pro-actively ask drivers to drop you at the massive Haarrijn service station (see below). The best traffic lights to pick, as there are three sets here, is the one on your left side when you are standing facing the bridge.

From here you can also walk over the bridge, walk along the motorway over the grass towards a small petrol station 250 meters further, behind the bend. If you do that don't try (like me) to go right to the little residence, there are rivers and no path to get to the station, there are no other ways than walk along the road. Be careful when walking here, the space between you and cars is minimal.

NOTE: Though the spot is generally awesome, you are likely to spend hours waiting for cars going as far as Haarrijn on Sundays (and probably Saturdays too). It might be reasonable to try further spots to avoid local traffic during the end of week.

If you are too lazy to go that far out of the city, take a bus or metro to the station Amstelveenseweg and stand on the on ramp there with a "Utrecht" sign. There is a wide shoulder and it doesn't usually take more than 10 minutes to get a lift. Once on the highway, hop from rest area to rest area and you wont have any problems arriving at your destination.

Just before Utrecht, after exit 5 (Breukelen) and just some kilometres before the Utrecht Ring you find a big petrol-station called Haarrijn. This is an excellent spot to find drivers for larger distances. Place is 2.5 km from Maarssen train stop

It is very possible to hitchhiking a boat around the Amsterdam canals. Just sit next to the water and thumb and eventually someone will stop. This is more aimed at sight seeing than getting somewhere specific, but more worth it than paying for the touristy ones.