Graz is the second largest city in Austria and the capital of the province Styria.

1) Take the tramway #4 or #13 to direction Liebenau and get out at the station Dr Lister Gasse.

2) If you like it more to ask people at the petrol station directly you can go with the Tram number 6 from jakominiplatz to Schulzentrum St. Peter and from there you take the bus 72 to "messendorf heimgarten". wlak along the street 200m more and you find two gas stations. Highway is just a little bit farer along the street

Train to Kalsdorf Graz Bahnhof than walk 3.5 km to Mein HOLTER Bad Ausstellung Premstätten. Asfinag Rastplatz rest stop and Agip Unterpremstätten fuel station is on opposite site of E59 highway (there is small distance between them) 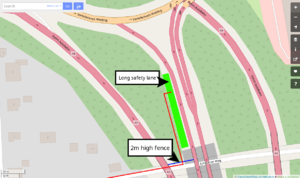 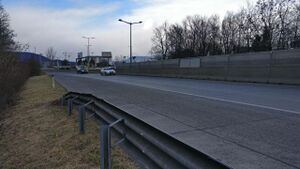 Photo of the emergency lane, part 3

A small roundabout behind the Murpark shopping centre (and the P+R). Just stand at the corner with the car dealership. There will be a gas station behind you with plenty of room to stop. All the cars going onto the ramp must pass you and can see you clearly since they have to slow down at the roundabout