Salzburg is a medium-sized town in the center of Austria, very close to the German border. It has direct motorway connections to Vienna, Munich and Slovenia (Villach). Most of the traffic between southern Germany and Austria, especially Germans going for holidays, to the Croatian coast passes Salzburg.

West towards Munich, East towards Linz, Vienna, South towards Graz

When you want to go over the A1, no matter which direction, you should go to the ramp Salzburg Mitte at the Münchener Bundesstrasse (B155). There is a lot of traffic and enough place to be seen and for cars to stop. From the town center it's 20–30 minutes walking, but you can also take the bus #4 to Schmiedingerstraße.

Going in the direction of Munich, there's plenty of space directly on the ramp to the highway, just before the beginning of the tunnel.

Sigurdas and a friend taking it easy while hitch-hiking to Salzburg, 2005 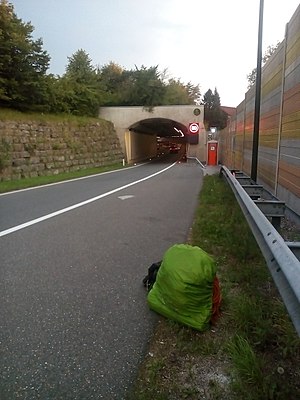 The hitchhiking spot for Munich at Salzburg

Another good spot is a bus-stop MAP near the end of Bahnhofstrasse, where the Landstrasse crosses the Salzburger-Bundesstrasse, just before the small railroad tunnel. Walk north from the main railroad-station in the city center (10-15 minutes), then follow the Bahnhofstrasse until you arrive at the Landstrasse. This spot is especially good for direction East.

When traveling to Graz, the best option might be to follow the A1 towards Linz. Swap to the A9 at the petrol-station left at the crossing 'Voralpenkreuz'. Your driver can continue its normal route from there towards any direction. The A9 towards Graz is a nice tour with many tunnels.

Take bus #3 to the terminus then walk south along Alpenstraße to the junction with the A10. To avoid walking back, you can also get off two stops before the terminus.

The ramp onto the A10 worked really well, a car going to Villach stopped within a few minutes. I would reccomend to take the bus 170 from the centre however as it gets you much closer to the ramp, from where the 3 leaves you on Alpenstrasse it's a long walk.

There is also a field here that is suitable for stealth camping. Walk about 100m further from the bus stop on the Alpenstraße, until you come to the Fürstenweg on the right side. Enter this street and immediately to your right is a really big field where it's possible to set up a tent.