Slovenia is a country in Central Europe according to wikipedia, alternatively part of Southern Europe. It is a member state of the European Union as well as the Schengen Agreement. Hitchhiking used to be more common here in the past, but it is still very doable and safe. Drivers are happy to see a hitchhiker and will tell you stories about hitchhiking when they were young. People in Slovenia usually speak English (at least the basics) but German and Italian(on the cost) can also come in handy.

Hitchiking close to highways will take you far and fast, but if you have enough time, use it to hitchhike on the small roads. Slovenia can offer you a lot to see on its small territory. Geographic landscapes change fast and you can get from the foot of the Alps to the Adriatic sea in about 3h ride, or to Pannonian basin in 5h.

From the capital city Ljubljana, it is easy to hitchhike to the north-east (Maribor, Celje, Vienna, Graz (Austria), Hungary), north-west (Jesenice, Bled, Villach, Salzburg (Austria), Germany), south-east (Zagreb (Croatia)) and south-west (Postojna, Koper, Italy). Your best choice would be to use highway entrances, and to hold a sign marking your destination. For more info, check out the page Hitchwiki Ljubljana. Hitchhiking in the rural areas is even easier, and it is possible to get a pick even on the smallest roads. Highways are always in a good condition, there are also service areas on the motorway.

The highway rest stops, standing with a sign seems to work better than asking people, especially if you don't speak Slovenian.

A 2 - Ljubljana to eastern Croatia

A 5 - Maribor to Hungary

Regions and their number plates 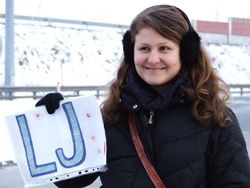 Since Slovenia is a part of Schengen, borders with Austria, Hungary and Italy are not a problem. Usually you just pass them without stopping, but sometimes the police would stop the vehicles and ask for documents (ID is enough for EU citizens). It is more strict on the Croatian border, because Cro is not a part of Schengen yet. You'll usually get stuck in the line of cars, waiting time depends on the traffic. Let's hope, it changes soon:)

When leaving the country, don't forget that Croatia and Hungary don't use Euro(€) as their currencies, but Croatian Kuna and Hungarian Forint. You can exchange euros in banks or post offices.

If you want to pass the border, but get a pick to towns or villages close, you can take trains or busses to pass it. It is not very expensive.

The link above takes you to the Slovenian Railways page, where you can see all about the train connections with neighbour countries (usually from Ljubljana), as well as local lines. It is also the last way out, if you get stuck somewhere. (stay strong<3)

Of course, you can always use Flixbus or any other bus line too.

Crossing from Slovenia to Austria : Border crossing is a very luxurious hitching spot, as the traffic slows down to about 10km/h (because of the pay toll for Karavanke tunnel, when the road is busy) so the whole highway sees you clearly. There is also plenty of space for drivers to pick you up.

As everywhere in Europe, it it not allowed and very dangerous to cross the highway in Slovenia. Also be careful about crossing the red lights in Slovenian cities, you'll get a 20-40€ fine, if you get caught.

Wildcamping in Slovenia is officially prohibited, but by my personal experience, that is not a big problem. As long as you don't make fires and follow basic ruls, people won't mind you. If you want to camp close the buildings on the private property, ask the locals. And don't try to put a tent up on the tall grass, since the farmers hate it to the bottom of their hearts. As long as nobody calls the police you're good. Couchsurfing, especially in Ljubljana, works fine as well.

Tips are not mandatory or expected in restaurants, but it is always nice to tip, if you're happy with the service. Slovenians often tip in bars.

There are 2 main words for "hi" in Slovenian. Živjo (Ž is pronouced /ˈʒeː/) is used in Ljubljana and surrondings, and Zdravo is dominant around Maribor. You can make a good impression making a difference between the two;)