There are few roads and no motorways. To hitchhike onward it is necessary only to go to the end of the town, and passers-by can direct you. Andorrans are used to hitchhikers, as many of the South American workers here hitch to work and back. However this means that sometimes there is a bit of competition for good spots to thumb. That being said, bus stops and parking bays are plentiful enough that you can simply walk further down the road. 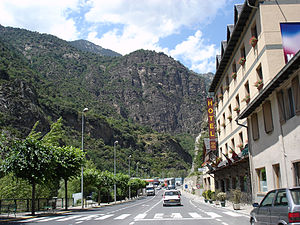 The official language is Catalan but basically everybody speaks Spanish, a lot of people french and people will likely have a basic english level.The currency used is Euro.

Andorra La Vella and Escaldes (the main cities) can be difficult to hitchhike from, try to get away from the center and look from bus stops where drivers can easily park. Petrol stations can be useful too, pay attention to the car plates: gas is cheaper in Andorra so a lot of tourist fill their tank before leaving.

While Andorrans themselves are sympathetic to hitchhikers, you are much more likely to be picked up by someone of another nationality. Try to look as tidy as possible, nomads and backpackers are not so common and is narrow minded place. 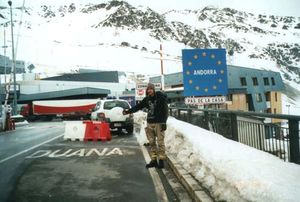 When using the A61 in France it's better to hitch a ride to the Péage gate's just before Toulouse, as there seems to be little trafic from Carcassonne to Andorra.