Hitchhiking at night can be much less successful due to the usually low night traffic on the roads in Estonia. Since Estonia is not a very good transit country one shouldn't hope for a truck either. Be aware that if you happen to stand on a dark road at night you must (by law) wear a light reflector so that the drivers can see you. Or better yet - reflector vest - too many people have left their lives on the roads during dark autumn evenings! (Be careful with wearing a vest though as many drivers might think that you are a police officer measuring the speed of cars and will not stop.) 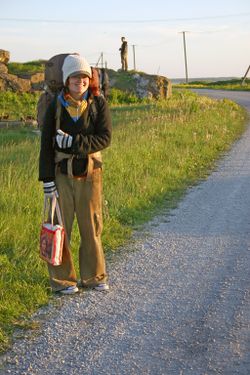 Summer 2018 & 2022: It was my starting location and final one, so it's my home country. Some people say that Estonians are mistrustful and I can agree with that by an example of woman who, before taking us (couple), took a forth & back drive on the same road twice in order to better consider if she's taking us. The time of waiting is not long (30-90min) and normally the drivers are very kind. There are different types of drivers you can get (estonian or russian speakers) but it doesn't really affect the trip. Once I was been taken by the drunk diver, so be aware. -- HHer-Vert