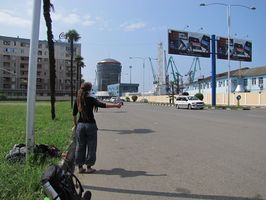 From city centre go in direction Turkey and soon you'll come to the crossroad where you go to left following sign Akhaltsikhe. In first ten kilometres there are a lot of cars and marshrutkas(minibuses) going only short distance so it can be harder to find someone who'll take you little bit further. Road is going through mountains and it's really bad quality. After lets say first 60km there are even less cars. It can take you a long time to cross the mountains because there are only small villages and locals usualy travel by marshrutka. Even when you take a car it will be very slow ride because there is no asphalt on the road. From village Zarzma (30km from Akhaltsikhe) there is really nice asphalt road and also more cars to hitchhike. In Zarzma there is also a monastery and if you ask monks they might offer you a dinner, warm shower and bed for the night(for me it worked, but for sure it's good if you speak Russian or Georgian).

Note: not to be attempted in winter! The pass is closed approximately late September to late May.

August 2018: buses 15 or 17 go straight to Sarpi, starting point for their route is Bus Station.

Bus 16 and marshrutka 88 straight to the border. Can catch them on Tbel Abuseridze Street and well, all along the main road going through Batumi.

The cheapest sleeping is around the bazaar, where there are some cheap hotels and nearly every family rents out rooms. Even in high season a room for two people can be had for 20 lari. There are also some cheap hostels. In Makhinjauri (you can get there with local buses, number 10 or 101) there is large beach (of little rocks, not perfect as sand ones but there's no sand in black sea..) away enough from the city and easy to reach. There are also minimarket to grab/buy meal and even an internet cafe. Also a good spot to start to hitch to day after.

As of August 2017 it is possible to pitch your tent in front and to the left of the Hilton Hotel facing the sea. There are a lot of other tents so you can meet locals and other travelers and you will not be bothered by the police. It also has been reported that camping around the alphabet tower is possible.