Aachen is a city in North Rhine-Westphalia, Germany, close to the Netherlands and Belgium.

Cars number plates starting with letters AC are registered in this locality. License plates with DN indicate that a car is from the neighbour locality of Düren in the east. The central terminal for local and regional buses is called Aachen Bushof.

Local inhabitants tell that during recent months there were some car robberies (summer 2014), when one person stops the car and suddenly other people appear and take the car from the person. It was said to be some immigrants from Belgium. So car drivers are very circumspect and it is harder to get a lift there.

The Europaplatz roundabout is a popular hitchhiker spot to start to any destination within Germany. It is located in the east of Aachen directly near the on-ramp and can be reached quickly. There is an Esso petrol station where you can ask and that also offers a spot where cars can see you easily and stop. If you don't feel lucky at the Esso there is also an ARAL petrol station at the same roundabout. Cars could also stop for you at the hard shoulder right after the roundabout, but the spot is already on the autobahn so police might ask you to leave.

Getting there is a 15 minute walk from Aachen Bushof. Go east for the Peterstraße which later becomes the Jülicher Straße. At the Blücherplatz square you will see a church to your right. Bear right following the B1 federal road and you will come to the Esso petrol station.

It is possible to get to Maastricht via the autobahn A4 (A76 in Netherlands) or the federal road B1 (N278 in Netherlands). To take the autobahn, walk from the Ponttor while in Aachen for about two kilometers up the Roermonderstrasse or take the buses 27, 37, 47 or 77 from the central bus station Aachen Bushof to Jupp-Müller-Straße. There are two petrol stations and the bus stop for thumbing where you can find a Dutch driver. If he's not passing by Maastricht you can get out at the A76 exit #2 Geleen or N281 exit Maastricht and continue from there.

People going from Aachen to Maastricht might prefer to use the federal road via Vaals, the first town after the Netherlands border, instead of the autobahn. To get there, go to the B1 Vaalserstrasse or take a bus to Vaals. When in Vaals, walk to the roundabout on Maastricherlaan road, go for 20 meters more and you will see a bus stop where cars going to Maastricht can stop.

You can either hitchhike there or take the bus. Hitchhike from Europaplatz roundabout as explained in going east. To go further east towards Germany, stay on this side; cross the autobahn to continue towards Belgium or Netherlands.

Bus line 52 from Aachen Bushof in direction of Eschweiler Bushof will take you to the station Röhe Wasserwerk in about 25 minutes. (3,20 Euro in January 2012). To continue in direction of Köln just walk back 500 meters, to go to the Netherlands or Belgium cross the bridge over the autobahn and turn left at the first street. 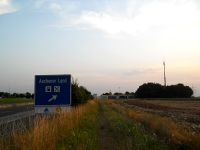 West towards Liège (B), south towards Luxembourg

To go to in the direction of Belgium, especially if you want to go to Liège or Luxembourg, go to the service station Lichtenbusch on the German-Belgium border at the A44. There's not too much traffic, and most of it seems to go via Liege and Namur to France.

Take bus 11, 36, 55 or SB63 from the centre to Kohlhof. Walk westwards on the little street parallel to the motorway and you will find the service area on the right. There's a pedestrian bridge connecting both sides.

One may also thumb at the on-ramp at the Autobahn exit Aachen Brand on the A44. To get there take bus lines 25, 45, 55 or 68 from the main bus station Aachen Bushof until Königsberger Straße (2,55 Euro as of May 2013). Walk 500 m along the road and either thumb down the cars coming from Aachen centre turning right or the cars going straight onto the highway from the industrial area. Beware that there is local traffic that will leave the Autobahn on the next exit.

To get into the region south of Aachen hitchhike from the bus station Aachen Siegel. It can be reached by bus lines #11, #21, #36, #46, #53 and #SB63 or by a 45 minute walk from the city centre to the south. The spot is perfect if you want to hitchhike south to the Eifel in the direction of Roetgen, Monschau, Simmerath or further. Cars can easily see you and stop.

If you are with people that are going directly to Aachen being dropped of at the central bus terminal Aachen Bushof is a good idea. Most buses come through there, but this is not the main train station. Otherwise, if your driver is only passing by the city your best option to get off depends on the direction.

Don't drop yourself at the Dutch petrol station (Shell) near borderpoint Vetschau. It was very difficult to find a ride just to Aachen and I stucked there for 3 hours in Feb 2018. There is also NO train-station in the next village Bochholtz (like in some maps), but at least some bus-services to Aachen.

When your driver is passing by on the A4 it is a good idea to get out at the autobahn service station Aachener Land and take the bus 52 to the center (see Hitchhiking Out). Buses to Aachen go weekdays every half hour between 5:00 and 20:30 and hourly until 23:30. Saturday service is from 5:30 until 23:30 and sunday service is between 8:30 and 23:30.

On the A44 from/to Belgium, get dropped off at the exit #3 Aachen Brand. You can use the frequent bus service at any time from there to the center (2,40 Euro as of January 2012) or try to hitchhike. Your driver can get back on the highway easily.

Check the website of the local bus operator ASEAG for bus informations. There is no english page but you can just input your request on the top right. Input the start city (e.g. Aachen) and station (e.g. Bushof, the main bus terminal) and the same for the destination in the second row. The results are understandable without knowing German.

People with monthly tickets and job tickets can take you along for free in buses and regional RE trains on weekdays from 19:00 until 3:00 and on the whole weekend within the area of their validity. Feel free to ask around.

There are quite a few police controls around Aachen, so make sure you are not bringing any drugs from the Netherlands to Germany as you might get controlled. Controls are for sure for buses, cars and even bicycles. Bus lines from the NL are being controlled, especially the line 50 from Maastricht if you get out at the main train station. Cars are more likely to be controlled if they have registration plates from other cities than Aachen.