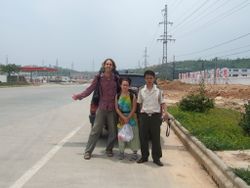 Amylin and Guaka with a police man in China