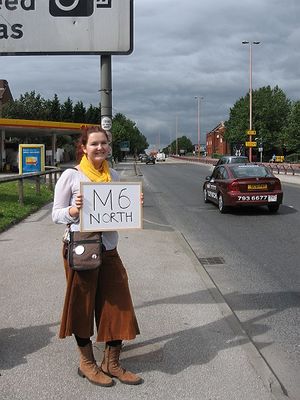 Alternatively, you could keep on walking along Regent Road until you get to the "roundabout" and get to the shoulder on M602. Getting there is a little complicated since it's not very pedestrian-friendly. Technically, you'll be on the motorway, but it's right behind a traffic light so traffic goes slow - a police car passed by without batting an eye. Make sure to have a sign, since it's not clear which direction you could be going. Link to Streetview

Another option is to walk down the A56 (Bury New Road) and wait at the exit ramp of the ring road merging with the M60. Alternatively you can take the tram to Prestwich to get there.

2) You don't necessarily need to be on the M56. There are a few good spots on the A5103 (Princess Parkway) so depending on where you start from in Manchester you could head to any one of these. I walked down the Wilbraham Road heading west and turned left (south) onto the A5103. 50 m further is a Shell petrol station with fairly good flow /next to Alexandra Park/. Although some of this will be local traffic, a lot is also continuing onto the M56 and then M6. If you don't want to wait around at the garage itself, there is a good bus stop just before so you could try some road hitching here. It took 10 minutes getting a ride out to the M6.

Many University of Manchester buildings have shower facilities for students and staff who commute by bike. Some buildings have access gates which require you to present a student ID - if this is the case say you forgot your wallet at home and the reception staff will ask you to sign in (it's just a piece of paper, for student no. make up any 7-digit number that begins with the no. 7). Here's a map of buildings with shower facilities and access restrictions)