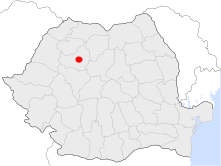 Cluj-Napoca (pronunciation in Romanian: /'kluʒ na'poka/; German: Klausenburg; Hungarian: Kolozsvár) is a city in north-western Romania and the seat of Cluj county. The city, one of the most important academic, cultural and industrial centers in the country, is located in the historic province of Transylvania, being also its historic capital, and is approximately 440 km north-west of Bucharest, in the valley of the Someşul Mic river. It concentrates about 310,000 people, but a high rise in metropolitan population is expected within the next 10 years.

This direction is good for northern Transylvania and going northeast into the province of Moldavia.

Taking bus 8, 30 or 46B, or trolleybus 4, 6 or 7 east to the stop IRA / Atlas (in the Mărăşti neighbourhood) After you get off the bus, you should see a bridge going up over the railroad tracks. You can hitchhike from the start of the bridge (near where some taxi drivers are typically hanging around).

You need to get to Sigma Center, in the Zorilor neighborhood, you can also look for the universitat techina. (the bus station is called Observatorului). You can do this by taking any of the buses 35, 43, 43B, 46, 46B or 50 (these cover most of the city, but if you can't find a stop for one of them, ask around). It's best to ask someone how to get to Zorilor, so you know in which direction to get on the bus. After you get off the bus, you should see a large round-about, close to the Sigma Center buildings. The hitchhiking spot is a bit uphill from that. Related map Exiting South

Take f.e. bus 40, 40S or M16 to the station "Drum Faget". There is a roundabout with directions Bucureşti or Făget right after the bu's stop, so you can easily find a ride south from the bus stop.

You need to get to Node N, a large clover-leaf intersection in the Mănăştur neighborhood. You can do this by taking any of the buses/trolley-buses 9, 24, 29, 52 (to the Bucium stop) or 1, 6, 25, 43, 43B (to the Clãbucet stop) (these cover most of the city, but if you can't find a stop for one of them, ask around). It's best to ask someone how to get to Mănăştur, so you know in which direction to get on the bus. If you got off at Clãbucet, follow the road, make a right, and you'll be at the Bucium stop. From the Bucium stop, follow the road for about 100m. The large clover-leaf intersection should be visible. Make a left at the intersection. Right after it, there's a good hitchhiking spot, and there may be others hitching there.

If you are going to Budapest, make a sign reading "Budapest". Because all traffic from the culturally Hungarian regions of eastern Transylvania passes through this spot, many drivers are going straight to Budapest.