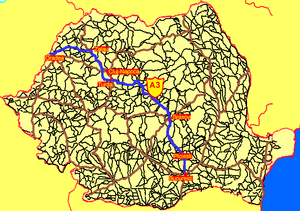 Location of the A3 on the map of Romania

The A3 or "Transylvania Motorway" is a partially built motorway in Romania. Upon completion, it will be a four-lane, 588 km long motorway, stretching northwest from Bucureşti via Braşov in central Romania to Oradea on the country's border with Hungary. It is currently the largest infrastructure project in Europe and has an expected total cost of 7.2 billion euros. The motorway will link the following cities: Bucureşti, Ploieşti, Braşov, Târgu Mureş, Cluj-Napoca and Oradea.

As of December 1st 2009, 42km of the motorway are operational, linking Turda and Cluj-Napoca.