For heading north on the M1, you can take the bus, tram, or train to Meadowhall Interchange from different parts of the city. Here, there is a layby just before the on ramp to the M1 (northbound) after the Sainsbury's petrol station.

Hitchhiking Out Southbound (M1/A1 to Nottingham, London) & (A1 East to Cambridge, Norwich)

There are a few ways to get onto M1 southbound from Sheffield:

- From Sheffield South: Opposite the BP garage at Meadowhead roundabout there is a layby, not ideal but OK.

- From Sheffield Centre: There is no obvious or easy way! You can get the X54 or X55 from Sheffield Centre to junction 31 of the M1 - from which you can access A57 to join A1 east or join M1 south. You can also stay on the bus to get to village of Woodall (about one hour ride from Sheffield city centre) and walk down a farmtrack to Woodall Service Station. Counter-intuitively, this is also a route for going North (there is a footbridge over the motorway). 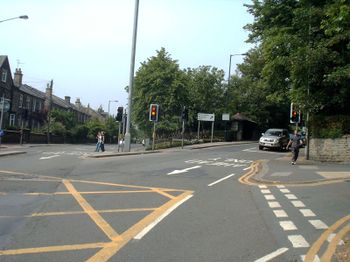 Many cars drive directly to Manchester or Stockport. Once you're in the countryside hitching becomes a lot easier, so it it is worthwhile accepting short lifts.

The "traditional" way to hitch out of Sheffield is on the 'Castlegate'/'Sheffield Parkway' road, just after Park Square roundabout. However, the road system is complex and it is very difficult for drivers to stop there.

The Attercliffe Common/Broughton Lane junction is another possibility for accessing the M1, although it is unlikely to be much better than the Castlegate/Sheffield Parkway spot described above.