Russia is the largest country on Earth. There is a large number of active hitchhikers, but compared to the total number of the population it's not that much.

It is a great country to hitchhike. Some drivers expect money, but most of them don't.

Distances like 1000km/day are ok to hitch sticking to major roads (marked M on the map, i.e. M6). Do not expect them to necessary be highways – sometimes even a major road is a narrow lane with a beaten-up pavement. There are real motorways, though, marked with a green sign of an autobann same as in Europe. Officially pedestrians are prohibited in such areas but in most cases you can get a lift even on a 8-lane M4 speedway near Moscow, with cars crossing 4 lines to pick you up. The road police might chase you away (and also check your ID in the meanwhile) but in most cases they just do not care.

Because you can get dropped off and immediately hitch onwards on nearly all roads in Russia, using a sign is never necessary and in fact the community recommends against it. Hitchhiking in Russian is called avtostop (Автостоп). It literally means “stopping cars”, and is basically the only word 100% understood as hitching (i.e. traveling by getting lifts for free).

In mostly all bigger book stores in Russia one can find the Автоатлас России (Auto Atlas Russia) which is perfect for hitchhiking Russia. Including gas stations, DPS stations, even traffic lights along main roads. The atlas also includes city maps and maps of Ukraine, Belarus, Moldova and the Baltic states as well. Price is 377 RUB (July 2009). 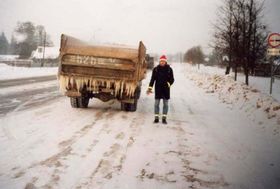 Some consider Russian roads are not among the safest on Earth; this might or might not be true.

Its common knowledge Russians like to drink vodka, but you will unlikely meet a drunken driver unless you go deep into some village area; driving drunk is heavily penalized in Russia so majority of people never wants to run the risk if there is at least a single police checkpoint on the road (on all the major roads, there are many). But, just in case you encounter a car with a drunken driver inside – wave him away and wait for a sober one.

If the area feels unsafe you might want to hitchhike from police post to police post. The police posts situated on all highways with intervals of about 100 km. These posts, commonly called Post DPS, are good places to hitchhike since cars will drive by slowly, and police is always close. You can also ask the police officers to help you get a ride which really might work. Be prepared to be asked for your ID or even run a cell-phone check (verification that your cell is not in the stolen cells database), though.

Also, there is a possibility to get a lift by talking to drivers on gas stations. You will not be misunderstood but since there are almost no highways and you can point your thumb anywhere, wasting time on a gas station waiting for cars is not preferred unless there is heavy raining, or the spot is bad etc. If there are two of you one can hitch on the road and the other one ask people on nearby gas station; that really might bring you a lift faster. But the “default” method of hitchhiking in Russia is still thumbing on the roadside ;)

Do not write places names on cardboards – nobody in this country cares to read them. Or, if you still want to use the paper, write a region number instead of the name (see below for a list of reg numbers).

Many Russian girls do hitch alone, and still scary stories seldom hit the news lines. It does not at all mean that the country is free of perverts, and almost all of the solo-travelers (not necessarily girls) will tell you accounts of some sexual harassment they have encountered while hitching. 99% of such encounters end OK with nothing more serious then words but if you do not want to be asked for sex – or to hold a camera while somebody is masturbating – consider finding a travel buddy. Somehow, Russians are still very amused by foreigners, and many report that solo traveling even extremely long distances, like Central and Eastern Russia, for a foreign girl who speaks some Russian is absolutely safe since she is treated like someone ‘from the outside’ by virtually everyone. Keep in mind that being a foreigner you are somewhat protected from some issues that Russian hitchhikers face on the roads.

Police in Russia just loves to check IDs and you can get a hell lot of troubles if your papers are not in order (being asked for a bribe is the least). You do have to have your passport with the visa and other papers you get while crossing the border handy. A good idea is to put them in some transparent waterproof bag – the immigration card is absolutely soviet style, and will not survive even the light raining.

Also, Russia still does not have a freedom of movement. That applies to both natives and foreigners; officially, you have to register in 3 days while staying in any city, village, etc. Practically, villages and towns can be neglected, but please do register once you arrive to a big city (especially Moscow), unless you are planning to stay for less then 3 days. Normally any hostel or hotel you stay in will do it for you; even if you are staying at some friend's you might ask their staff for help too. If you do not plan to stay for a long time just have some strong evidence that you have just arrived. Buy a hamburger and keep the receipt before leaving some nice town or city you pass by (make sure there is the place‘s name on it). The train or bus tickets are the best means to persuade cops you are not hanging around St.Petersburg for half a year already, so you might take a short ride on a local train from time to time to have a set of tickets marking your way.

Whilst it is not recommended, you may be able to risk not registering your visa. The border police do not often check visa registration, particularly at non European borders, as it is too much hassle. Some regular tourists in Russia comment that the cost and time consumption of registering a visa is too great, and prefer to hope that they are not checked when leaving. However if you are caught with an unregistered visa, expect at least a 2000Ruble fine.

Russian number plates contain a region code, that indicates the origin of the car and possibly the drivers destination. You can write it on a cardboard instead of a place name and use while thumbing. See Russian plate numbers for a list.

Citizens of most countries need a visa (notable exception: most former Soviet states (apart from the Baltic states) and Israel). Most visa types require an invitation.

The border seems to be open only for holders of CIS passports.

It's no problem to walk over the checkpoints in Latvia or Estonia to Russia.

The crossing at Zabaykalsk/Manzhouli requires that you are on board a vehicle. It is possible to get on board a Chinese tour bus for around 300roubles. It is also ok to stand before the entrance to the border area and wait for a ride, however prepare to wait a long time. If you are not Chinese, Mongolian or Russian, prepare to be interrogated by the Russian border police for around 30 minutes.

The Verkhny Lars - Darial Gorge crossing was reopened on March 1st, 2010 and since July 2011 is open for international travellers as well. Getting into Georgia via Abkhazia is not possible. For more specific information, check the Abkhazia article.

The country is Russia's eternal 'native brother' and, despite all the political mess that constantly happenes between the two states, Ukraine is one of the countries that is very easy to enter from Russia (Russians do not even need a foreign passport to enter it, as well as for Belarus). Make sure that the border crossing is working before attempting to use it. The big gate on the M2/E95 road (Moscow to Kharkiv) can be passed by foot, which is very convenient because you do not have to wait in the line of the cars and you wont make your driver wait for you in case you have any delays with your passport. You will have to leave the car before all the checkpoints begin, though, or you will be considered a car passenger by the border police.

Unfortunately, Russia still lacks a large hostel network. You can find several hostels in Moscow and in St. Perersburg, and they are gradually spreading over the country; but as for now, in almost any city nothing of the kind is available. To find both accommodation and company, you can use Hospitality Club, CouchSurfing and Russian+Ukranian+Belorussian Livejournal community Vpiska. The official language of the latter is Russian but you can use English as well (ask other members to translate your post to Russian in the end of your message if you like). Just post the name of the locations you are planning to stay in, or your route, the dates of your possible arrival, the number of your party, some information about you and your mobile number.

If traveling long distances through the country, it is advisable to bring a sleeping bag and tent. If sleeping by the side of the road, try to find a place obscured by trees, and avoid places with stray dogs. Sleeping by the road is usually very safe. Security guards and Police will usually not bother you if they see you.

Long distance truck drivers are often very hospitable, and many will allow you to sleep in the 2nd bunk of their cab.