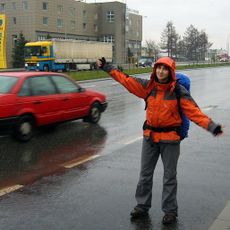 my name is Katya. But some of you know me as lucysd.

and lucysd on Hospitality Club

and lucysd on Gmail & Picasa photos

And i'm lucysd everywhere else except the few sites where some japanese girl occupied my nickname. Arrrrghhh! :) In the middle of Russia - HH to Altay

I did my first hitchhiking trip in 2001 but i can't say that i've been to many places still. But i explored some neighbourhood countries which visas were easy to get. I've hitchhiked in Ukraine, Belarus, Moldova and Poland a lot, traveled in Lithuania, Hungary, Slovakia (cycling mostly and a bit of HH) and Abchazia (Georgia). I've made it a bit farther to the East when hitchhiked to Altay Republic in Russia (Siberia) in the summer'08. That's my poor HH expirience.

Something else about me?

After eight years in Kiev i've moved to Lviv finally. That's where i live now.

I've been working as a journalist for a news agencies and a magazine in Kiev. But i quit my job in July before going to Altay trip. So now i'm about to work as a freelancer.

Besides HH i like cycling and hiking, and traveling by trains sometimes (OMG! Is she still a hitchhiker then?!).

I'm a big fan of The Beatles, Pink Floyd, Bob Dylan, Led Zeppelin and many many other '60-'70 artists (all the "The..." bands esp.) and i'm really fond of old rare psychedelic music. I'm not a big fan of nowadays bands except the Radiohead + some other ones + few trance, ethnic, world music projects. Well i can post the whole list of artists but you better check it in my last.fm profile :)

I also like Monty Python's, Futurama and "Married to the sea" comics. 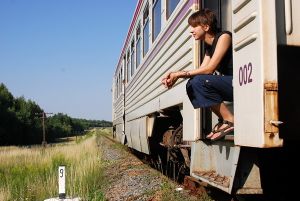 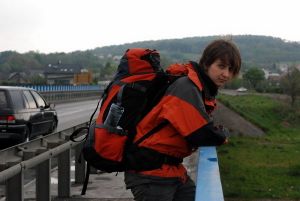 Egypt, trying to HH (that was weird:)
Retrieved from "https://hitchwiki.org/en/index.php?title=User:Lucysd&oldid=28998"
Categories: