Difference between revisions of "Turkey"

Hitchhiking in Turkey is easy. Sometimes it may be customary to contribute a few Lira, but for most hitchhikers this is unheard of. Looking like a Western backpacker will get you a lot of attention when travelling outside the major tourist areas. Often, the first vehicle to pass will stop for you (sometimes even if they are going the opposite direction!) Lifts with big trucks are the most common − partly because personal cars are very often quite full. Turkish truck drivers are generally very friendly and helpful but may not speak a word of English. Knowing some German may help.

Some drivers might ask you for money, and if you are not willing to contribute to the cost of the ride, please learn to say Param yok (I have no money) before getting in the car.

While waiting beside the road, many town-to-town minibus drivers (which can be recognized by banners proclaiming town names all over) and occasionally intercity buses will flash their headlights or honk at you − to ask whether you'd like a ride (for a fee, of course). Shake your head both sides to show you're not interested.

alex: I did not find it difficult to hitchhike in Turkey. Most lifts I had have been with trucks (coming from the East), trucks have also been what I saw the most in the east. I did find it easy to get a long lift across Turkey, even when I found it difficult to get such a lift at the boarder to Iran directly (most trucks went along the coast South at the time I have been there). However, I also found the truck drivers I met quite lonely and searching for (close) contact.

Having a signboard (together with the thumb extended) certainly helps, since most Turkish hitchhikers don't use one and therefore it draws much more attention from drivers un-used to seeing signboards. Writing the name of first town on your route -no matter how small it is- and the name of a farther and bigger city is good.

Citizens of most EU and other Western countries can get a 3 months visa for 10 Euro or more. German, Czech and Italian citizens are allowed to enter the country without any visa at all.

Hitchhiker Guaka had a terrible experience at the Kapitan Andreevo-Kapıkule border crossing in October 2008 when he was refused entry by a grumpy border guard who was probably looking for baksheesh. It took a lot of convincing to be allowed back to the truck to get back his (Guaka's) backpack. The next day there was no problem to get in.

Turkish cities with more than 100.000 inhabitants

Following the recent events in April 2008, this hitchhiking guide to Turkey for girls might be an interesting piece to read for everyone (not only for girls) who's planning to hitchhike in Turkey. Safety is always important while hitchhiking, so check the Safety article before going out to wave your thumb! In winter it can be cold.

During the summer temperatures tend to rise above 35 °C, especially in the South, so it is recommended to secure yourself with sufficient supplies of water, and to plan travelling in a way that most of the actual hitchhiking would be earlier in the morning or in very late afternoon, to avoid a burning sun.

In winter, though, it can be quite cold in Turkey. 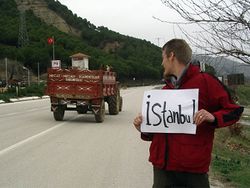 When you hitchhike in this country, people might try putting you on a dolmuş (mınıbus) or bringing you to the otogar (bus station). The dolmuş is the most common way of public transport inside and between cities & towns. These small buses that are advised to be used for small distances will stop anywhere on the road even if you don't signal them to stop. Generally, the ride on a dolmuş costs between 1 and 3 Lira.

For larger distances buses (coaches) are more common. They provide reliable service and are pretty comfortable. Free tea and snacks are generally served along the way, and the buses tend to stop in nice rest areas. Some drivers who pick you up as a hitchhiker may try to convince you to take a bus. If you do end up on a bus they are relatively cheap although not as cheap as trains which are slower but more adventurous.

You will never have to worry about lack of food in Turkey. Many truck drivers have coffee makers in their truck. Turkish people are very generous, and it is seldom that you get a ride without a driver offering you food. The food in Turkey is relatively cheap, and is very meat-based. There is also a variety of a good local produce of tasty sweets and snacks. The tea (black tea or apple tea in Istanbul) is the national drink, and almost all the people that you meet offer you a tea − this is probably the most common way of showing you their hospitable culture.

Hospitality exchange networks have many friendly members in Turkey, and they can help you with an accommodation.

All towns in Turkey have an OtoGar, a bus terminal. Most of these offer a warm and fairly safe place to spend a night. Nonetheless, be careful and try to place your luggage in such a way so that you are surely to be awaken in case if someone tries to take your things.

Many truck drivers will have an extra bunk in their truck cabin, and they are usually happy to offer it to a hitchhiker.

The first two numbers of the Turkish car plates indicate the city a car is registered in. These are sorted from 1 to 81 alphabetically. This rule is not applicable for villages that recently received the status of cities.

The number is given to a whole province, e.g. Antalya and Alanya are both 07, as they are situated in the same province (Antalya Province).