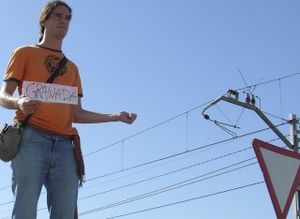 Spain is a member state of the European Union as well as the Schengen Agreement. Spain consists of the 17 Comunidades Autónomas. These are not only administrative destricts; Many of the regions have their own culture, language and some even don’t consider themselves as a part of Spain. For example the dominating language in Catalonia is Catalan and getting around with castellano (spanish) is not always possible. English is taught at school, but due some droll shyness, lot’s of Spaniards refuse to speak it. For this reason, most travellers learn at least un poquito (a little bit) of the Spanish language during their stay. The phrase Bas a... ? (are you going to... ?) is an excellent starting point.

When entering the country from France you should try to get a lift as close to your destination as possible. A good place for this is La Jonquera, one of the biggest truck stops in Europe. You’ll find plenty of international truck drivers all over the country, because Spain is a centre of the fruit industry, exporting their oranges and tomatoes. In the west, there is another huge truck stop near Irun.