File:Hitchhike in lappland.jpg
hitchhiking in northern Sweden
File:KathaliftartillMalmo.jpg
Katha uses the fastest transport alternative between Lund and Malmö
File:Malteliftarisverige.jpg
Öresund hitchhiker Malte and a helpful driver enjoying the moment during a ride in the region of Dalarna.

Especially in northern Sweden there are only a few main roads, which means that you might have a shorter time waiting and longer lifts. Be careful to stand somewhere where there is some sign of civilization. As especially in the north the roads are no real motorways and accessible for pedestrians, you can stop all the traffic, especially if you stand on something like a bus stop. When on large motorways you have to take care a little on which petrol station you end up on, as there are too many of them, with sometimes only little traffic on each of them, and as most of the petrol stations are one or two kilometers away from the motorway.

Anick-Marie had no chance at all hitching rides on Öland in May 2005. Aurélien hadn't either from Copehnagen to Stockholm in August 2011.

When people talk about the amount of miles they are doing with their car, it's acutally Swedish Miles, which equals 10 kilometres. 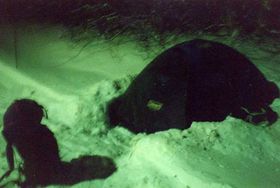 There's a quite useful map ("vägkarta") which you can get at OKQ8 petrol stations. It's for whole Sweden and has all OKQ8 petrol stations on it, which can be quite handy when hitchhiking and looking for a good place to be dropped off. Here's another map that you can apparently order for free.