Hitchhiking in Belarus is very easy and rarely your waiting time will exceed 15 minutes, at least on the main road M1 from Brest via Minsk to Moscow. As it is very common in Belarus, often drivers may pick you up without being curious about you or what you are doing, sometimes no communication at all. Belarusian people can seem gloomy at first sight, but in the end they are mostly very nice and helpful and drop you on a good spot. In rare cases a small number of older drivers might ask for some money when giving you a ride – to avoid that, tell the driver about your intention to travel for free before you sit into the car ("Ja puteshestvuju avtostopom, bez deneg" ["u" is pronounced as "oo" in English] – "I travel by hitch-hiking, not paying any money"). Usually, just saying 'no money' works just fine too. It might be more difficult if you are more than 2 persons travelling together – in such case it would be smart to split up for some time.

When hitchhiking in Belarus, it is very likely to find some other people standing next to the road, waiting for a car to pick them up. Although most people do not speak English well, it is nice to try to make some contact. Most of them might look angry, but it's just on the outside and once you start talking to them they're just very friendly and warm people. Some Belarusians will even wait for an hour with you in a snowstorm, waiting for another car to stop :)

Russian and Baltic truck drivers are reluctant to stop for hitchhikers in Belarus while Belarusian and Polish trucks are happy to have a company of some traveller(s). Hitchhiking at night is difficult but if you make yourself very visible you can get a ride even at two o'clock at night (some cars might stop just because a driver thinks you are police – light reflectors might give such an impression).

Note: In Belarus you have to wear a flicker (light-returning element) when you are on the road after sunset. The police have a plan to get some amount of violators each month, so the possibility of penalty (about € 10) is quite high. It's better to buy a flicker (it costs from € 1), and it's not a problem – now they are sold in any shop in Belarus. And it's a good idea to use them anyway when hitchhiking at night. 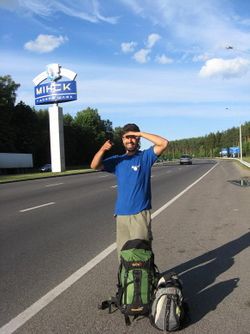 Belarusian number plates end with a number of the region the car is registered in.

Belarus is neither in the European Union nor in the Schengen Common Travel Area, and most non-CIS nationals would require a visa to enter the country.

You can walk across this border and it's probably best to do so as the lines of trucks and cars are really long. The border police is actually pretty nice! After you crossed the border to Lithuania it's only 33 kms to the capital Vilnius. After the border crossing the main road goes straight to Vilnius but, as the border takes some time for cars, and even more for trucks, you'll probably won't see that much moving traffic while hitchhiking. Your bag might be searched at this bordercrossing.

UPDATE (2015) It is not allowded to cross the border on foot anymore!!!

Please note that while there is no border control between Belarus and Russia Belarusian transit visa is still required for foreigners when transiting through the country from Russia to Poland, or vice versa. You can't get a visa at the border. If you go from Belarus to Russia make sure that you always keep your Belarusian migration card. The border is open, there is most likely no control and this means, that you will not recieve a Immigration card or an Entry stamp from Russia. Due to the Customs union between the countries, your card from Belarus also counts in Russia and in case you lose it you will find yourself in unfriendly situation.