Tramprennen is an annual hitchhiking race organized by the Club of Roam - Autostop! e.V. since 2008, in which over 100 go-getters hit the road using their thumbs. The competition takes you through Europe at the end of summer (Mid/End August), and during the two weeks scheduled for the race there’s plenty of room for spontaneity and discovering different cultures, both within the race and in the ever changing settings of the race. Competing with old and new friends on who can beat who, and what that person then has to do, are funkylicious activities that everybody can enjoy, but the race is so much more than just a fun and friendly competition. It’s not just about passing through the places as fast as possible, but also taking the time to meet different people with an open mind and discover a new culture together. It’s an opportunity to promote such funktastic values as: friendship, intercultural exchange, social engagement and obviously the sweet, sweet art of hitchhiking. Likewise, with fundraising and creation of awareness taking place both before and during the race: Tramprennen was also a big contributor to the projects of Viva con Agua, whose aims are to improve access to drinkable water, sanitation and hygiene in development countries, to the work of PRO ASYL, Sea-Watch [1] and since 2019 Cadus [2]. 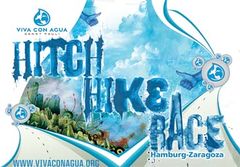 We want the race to be as awesomazingly open to everyone and for people to be able to share the laughs and stories we experience on the road, not just among the competing hitchhikers, but with everybody who’s a part of the race, never to forget the Big D’s: Drivers & Donors. Thus we aim to promote the art of hitchhiking as a valuable means of transportation, with social possibilities reaching far beyond what you would ever get from taking any bus to anywhere.

It all started back in good ole’ 2006, when some of us, started hitchhiking for the first time during our holidays, and then quite quickly and awesomely: we turned it into a race. This was done as a premeditative calculation in order to increase our Level of Fun from “Super Fun”, to the highest level possible: “Mega Extreme 2 The Maximum Fun”, and so begins the legend of Tramprennen. Later, in 2008, we decided that the fun and awesomeness might reach an even higher level, if we added more people to the competition, thus we did, and the race grew bigger. Seeing that many of us were already volunteers in Viva Con Agua, it was quite clear what we had to do. So we picked up our big gorgeous bags and stuck our thumbs proudly in the direction of the Water World Expo in Zaragoza, Spain, for many people this was their first time hitching, but definitely not the last, and so Tramprennen was born Even though years have passed by and the number of hitchers joining in has become over a hundred peeps, the original spirit of Tramprennen still remains. The race was split into different routes to avoid too large groups standing at the same spot and the support to water projects developed into fundraising. Racers are encouraged to find donors, “sponsoring” their own team. The idea behind this is to reach the people who usually wouldn’t donate to a good cause, by making it fun and showing that any contribution counts and everyone can contribute.

How does it work?

Hitchhikers get into teams of 2 to 3 people. They then choose one of the different routes of the race, consisting in 6 stages between different towns for a total distance of around 2000 kilometers. Each route hosts 10 to 12 teams, which adds up to 25 - 30 people. For each completed stage, teams get points depending on their ranking. Fair play between teams is also encouraged by giving extra points to those helping other teams while hitchhiking. For the last stage of the race, all routes are meeting at the same place to celebrate the end of the competition and its winners, being the teams with the highest scores. There's no prize to be won apart from the reward of accomplishing the trip all together, and standing in front of a 100 people happily cheering you as the winner of something incredible you never imagined being a part of. 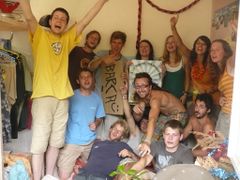 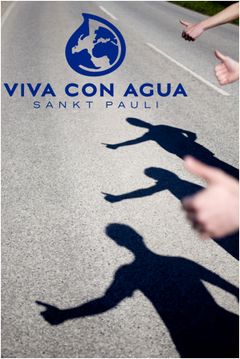