Take S-bahn S3 or S31 to Wilhelmsburg and then bus 13 to the last stop at Kirchdorf-Süd (max. ten minute trip). Walk east along Karl-Arnold-RIng for 200 m. Keep walking straight and cross over the small bridge. Turn right after the bridge on Altenfelder Weg and walk for ≈500 m to the junction with Stillhorner Weg. Turn left and walk for 400 m, crossing under the Autobahn until you reach the path (Jakobsberg) just after the on-ramp. Walk 300 m north along this path and you will reach the Raststätte. 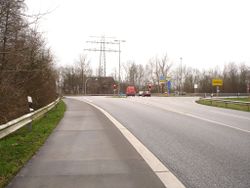 For going north on A7 motorway to mainland Denmark, take the metro U2 towards Niendorf-Markt. From there get out and ask people for the bus station (Busbahnhof). There take bus #191 until stop Sellhopsweg. Get out there, walk some 200m back to the traffic light. You'll see that the road going left follows the way to the motorway. There's no footpath, so you have to walk along the green space next to the road. Might be tricky in winter, easy in summer. Just take care when trucks and cars coming from behind! After some 300m you're at the ramp. There's enough space for you to stand on, and it's easy for cars to recognize you and to stop. Have a look at the picture for this spot. Oh, someone mentioned that this spot might be illegal to stand on, but can you find an Autobahn sign in the picture ? ;-)

You need to get to Raststätte Holmoor on the A7. Take a ride or take the S-Bahn A1 to Quickborn station. There take the bus 594 in direction of "U A Norderstedt Mitte" and get off after the bus goes over the motorway (Hasloher Weg stop). After getting off the bus, walk in the direction back towards the bridge (west) and you will immediately see a small road going left (Hasloher Weg). You will feel you are lost in the country side because after 200 meters, this way doesn't look like a street anymore. Never mind, keep going straight for another 400m and on your right you will see the petrol station. We needed less than five minutes to find a driver to Denmark :D 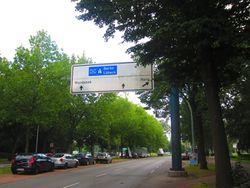