France is a member state of the European Union as well as the Schengen Agreement. It is a great country for hitchhiking. There are many friendly car and truck drivers. Drivers have to pay toll on highways - except in Brittany - and at some péage (toll station) you can get a ride easily.

There are no prohibitions about hitching in France, apart from the restricted access roads, i.e. Allemagne (all-ay-man'ye) in French.

The Michelin 726 National map of France is a good choice for hitchhiking. It shows all the major péages (see below) and service stations. You can get free maps in the péage offices - these also indicate where you can find all-stop-péages.

Autoroute means "motorway" in French. Most of them are toll roads, and the fastest way to hitch across he country. A péage is a toll booth. There are two types of péages: Big ones, where all the traffic has to stop to pay or get a ticket (called Barrières de Péage). These are excellent spots to get a long-distance ride, usually located near big cities on the autoroute. Another type is a side barrier, situated on all exits in the toll part of the motorway. On this kind of péages the traffic is much smaller so waiting times may be longer, but in fact waits can be longer at congested péages due to the attitude of drivers.

To reach the first péage, you may need to walk beside the highway; consult a map to see if the distance is realistic. It is illegal to be along the highway, as well as on some parts of national roads ("voie express"). If police see you, they will drive you to somewhere safe and may fine you 90 €. Péages are considered part of the motorway, and you do not legally have the right to solicit rides there. You may be asked to wait in the parking area which is after each péage. In practice, this is rarely enforced (maybe 5 % of the time). Most employees simply want to make sure you're not endangering yourself or others. Having a sign with your destination (or next city) is recommended and will distinguish you as a serious hitchhiker, and not a vagrant.

French cities with more than 70.000 inhabitants

If you search cities with less than 70.000 inhabitants, have a look at the seperate Région articles. You find them at the bottom of this page. 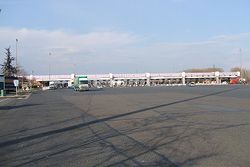 The fastest way to travel is from one of these to the next. Here are some information how to get a lift from péages:

French number plates end with the number of the département the car is registered in. For example, Parisian cars end with the number 75,78,91,92,93,94 and 95. See List of arrondissements of France and French vehicle registration plates at Wikipedia. New number plates are to appear in the nearest future and those will not carry any information about the region, unless the owner decided to put a department reference on it. The old plates will still remain for a while.