Hitchhiking in Japan is quite easy, and the key to true budget travel in the country and the way to escape the country's ruinously expensive domestic transport costs, where an hour on the Shinkansen can set you back ¥10,000. Coupled with camping, you can effectively cut down your daily budget to food and admission fees alone - although it is wise to allow for the occasional (literal) rainy day.

It is almost impossible to hitch out of Tokyo or any large Japanese city by waving your thumb on the Ginza. Thus, to get out, you have to find the places where drivers going out congregate, which in practice means service areas (サービスエリア sābisu eria, SA) or parking areas (パーキングエリア pākingu eria, PA) on the large toll expressways (高速道路 kōsokudōro) connecting Japan's major cities. As you might guess, service areas are larger and better equipped than parking areas, but surprisingly few Japanese are familiar with the difference so it's easier to label them all service areas.

Some SA/PAs can be accessed by cheap public transportation and then on foot. To see the map of all the SA/PA, you can use Nexco West or Nexco Central websites. Select one of the 3 mains areas on the top right of the website. Most Areas are also visible on Google Maps so you can easily try to get an itinerary to these. You can see on the map is there are stairs to access them. 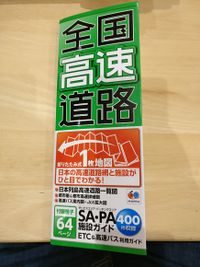 This "Mapple" Expressway map is a great help as it includes all SA/PAs along with their facilities. Most bookstores should have it for about ¥850.

Other traditional favourites include the offramps of roadside gas stations and convenience stores. The keys are visibility and accessibility: drivers have to be able to spot you in advance, and they have to be able to stop and pick you up without endangering themselves or others.

I agree, in the spring of 2018 I hitched all the way from Tokyo to Kyusu and found it very easy, eventhough I'm a very tall strange looking European. Most people seem to know what hitching is, and their hospitality once in their vehicle is astounding. You will be offered food, candy, drinks. Even a place to stay at times. I also bet several other hitchhikers with similar experiences. By far one of the easiest countries to hitch in as long as you stay in the expressway system. yogibear

The top worries of a Japanese driver when they see a hitchhiking gaijin are: Can he communicate? Does he know how to behave? The quick way to answer those questions is with a sign: 日本語できる！ (Nihongo dekiru!), literally "Japanese can!", is just six characters and works like a charm. And you don't really need to know Japanese all that well to use such a sign, as long as you can communicate... somehow... Most people have smartphones now that are connected to the internet all the time and love to use translation apps on them. So it is pretty common to have entire conversations over a smart phone. Rdoc101 had a deep conversation about getting married to my travel partner entirely through a smartphone.

If you are going to use a sign at all, then it is enough to stick with the four directions: 北 (kita) for north, 南 (minami) for south, 西 (nishi) for west and 東 (higashi) for east. You can use these anywhere in the country and people always understand what you mean. On top of this, it makes them think you know some Japanese, which will make them more likely to pull over for you.

Having a map in Japanese to point to is very helpful. Especially if you can't pronounce names of towns correctly.

Distasteful as it may be to get up at 06:00 on vacation, as a hitchhiker you must get an early start. Many of the longest rides are available early in the morning, and your hitchhiking day will come to an end when the sun goes down.

If hitching out of a tourist spot (Nikko for example where I hitched to Utsunomiya) you can still catch rides a little later on with the day tourists heading home. As long as it is still light you still have a fair chance of getting a lift later on in the day. The early morning rides I found were in a rush going to work etc so didn't have time to stop for me whereas the tourists are in no hurry.

As for who will pick you up, the range of humanity you will encounter is surprising and, once you've crossed the threshold into their car, the generosity and trust will amaze you. You will be picked up by young couples, grizzled old farmers, families with small children, travelling salesmen, single women, yakuza mobsters, Buddhist monks... and, almost without exception, you will be offered drinks and snacks, bought lunch and quite possibly offered a tatami (floor) for the night. But try to distinguish between offers of genuine goodwill and interest and offers out of duty or perceived obligation, as your driver is likely to feel that he is a host and he must treat you as an honoured guest, despite any inconvenience or even financial expense that this might cause.

Here is a anlysing of hitchhiking in Japan by Korn on - warmroads.