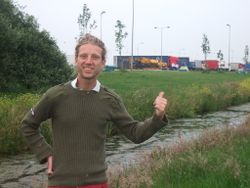 I hitch hike a huge amount in the Netherlands and it is almost always successful. As stated above, managers in petrol stations sometimes ask you to leave the main forecourt. This has been happening with increasing frequency to me at Shell stations in particular, but I have not experienced this at any other petrol company (they are usually more than happy if I politely ask where I could stand without being a nuisance)

Having had 307 rides from Dutch motorway petrol stations, I have been asked not to talk with drivers on the forecourt three times (at stations operated by Shell). Much more often I have gotten positive gestures from employees and occasionally they offered me a drink, a snack, a ride (!) or cardboard. Staff in Germany is definitely friendlier though.... Respect and politeness are keywords.