Chile is a great country to hitchhike. Especially compared to the South of Argentina, it's really good. Chile borders in the north to Peru, Bolivia to the north-east and Argentina in the east. The country is divided into 15 regions, which can be pooled in four main zones.

If you tell people you're a foreigner when you ask for a ride, they might ask to see your passport. Just swallow your pride and take the ride.

If you travel longer distances, you probably want to hitch the panamericana, called Ruta 5 here, which goes from north all the way to the south. Around larger cities, it's developed as a motorway. It's very common to walk or cycle on the emergency lane, so you can also stand there and put your thumb out. Cops won't bother either (I was standing right next to them holding my thumb out (to try out the hard way if it is legal) and they didn't care). Maximum Speed is 120 km/h, so if you are in a visible place, everyone can stop fast enough. Using a sign can prevent taxis, micros and buses to stop for you. They won't take you for free.

The traffic is not very dense in general. In rural areas, there might be one car in 5 or 10 minutes, so prepare for longer waiting times if you can't stay on the main roads (e.g. check some games you can play). To get to towns and out of there take a Micro or a collectivo, it is not worth it hitchhiking within a city (although sometimes possible).

If you are a tourist be sure to show it with your backpack, flags attached to your backpack, etc. The locals love chatting with foreign travellers. However, many people don't like U.S. Americans.

The best places in Chile for hitchhiking are easily in the extreme south, in the Region of Magallanes. From Punta Arenas, one can easily find a semi truck all the way to Santiago; while in Punta Arenas, themodernnomad was offered a ride all the way to Arica (on the border of Peru), but, sadly, had to turn it down due to the fact that he was trying to lose himself in Isla Riesco.

Crossing the Andes can be a little trickier than in most countries due to the high altitude. The police are also stricter about what can be brought into the country than in any other place in the continent: it is forbidden to enter with any kind of organic stuff such as fruits, veggies, beans, seeds, cheese, etc. You can try to pass them in your pockets. Just be sure to declare that you are passing with some organic stuff (rice, mate, polenta) so they can't charge you for lying and play dumb if you get caught. Worked for me with one bag of pine nuts (piñones) and one bag of seeds.

You can also only bring 2 packs of cigarettes, since they are much more expensive in Chile.

To enter Chile there is first a stop where they give the driver a piece of paper saying how many people are in the vehicule. If you are not going to go all the way with the same driver don't forget to ask for a specific piece that say you are crossing on foot or something. Also drivers can be reluctant to pick you up all the way through the border so a sign sayin' Fronteira or Aduana might help (then you can speak with them in the car)

In the north, most of the trucks will not pick you up because are afraid that Gendarmes can complains, eazy took a lift from a local truck and asked the driver to stop a Paraguayan truck for him.

Paso Jama is the northernmost pass across the andes between San Pedro, CL and Juyjuy, AR. Coming from Chile, Keith had to have his pack x-rayed. There are lots of Paraguayan trucks passing through here and few civillians. Keith waited 1.5 hours in San Pedro and 2 hours at the border. The border is at 4200m and can be extremely windy and cold, especially at night - be prepared!

Paso San Fransisco is between Copiapo, Chile and San Miguel, Argentina. There is little traffic along this route and you could wait for days at 3800m. Not recommended.

Paso Internacional Los Libertadores between Mendoza and Santiago is probably the best option with lots of truck and civillian traffic. You will also pass Mt. Aconcagua, the tallest mountain in the Southern and Western hemispheres.

At Paso Austral, you can possibly expect a needlessly complicated and long process once you arrive to Argentine customs if their X-Ray machine is broken (which it often is).They must do a manual search of your bags and tend to find silly, irrelevant things like tin foil that are apparently a matter of National Security. themodernnomad was once delayed leaving Argentina at the Paso Austral to Chile for several hours because of a 'suspicion' that turned out to be baseless. Fortunately, the Gendarmeria have poorly trained attack dogs who care more about playing with towels than sniffing for contraband.

Chile is a very safe and easy country to camp or squat. Hostels are rather expensive, so camping is a better method. The local gas stations (usually COPEC) are almost always hitchhiker friendly, and will be happy to let you crash behind the place for the night. The cities to exert special caution in when crashing out are Valparaíso (known for a somewhat dodgy center) and the capital Santiago -- those two make for the lion's share of crime in Chile.

"In Chile, the posta rurales operate on a no-pay basis, which is very different form the way proper hospitals do things in this country. In the postas, anyone, from anywhere, in entitled to free medical treatment and any medicines that are available, similar to the way they do things in Bolivia. The sacrifice is that the postas are not equipped with proper doctors (only paramedics), or operating facilities. " - from http://hitchtheworld.com

I wish I had known this! The "public" hospital in Copiapo asked for 24000 CLP just to see a doctor! -Keith

These are only on the Ruta 5 (or Panamericana Sur), but, as usual, are a very good place to hitch rides. There are a lot between Santiago and La Serena, but your first ride from Santiago will probably take you all the way anyway. From La Serena to Antofogasta, there are only a few.

Be aware that many roads in Chile are very remote and made of dirt; any road that starts with a 'Y' classifies as a rural route, (known locally as a reten). Some of these roads do not recieve any traffic for days, sometimes weeks at a time. Use caution when hitchhiking on one of these. You may think you can hike it for fifteen or twenty kilometres and then hitch a ride, but sometimes the cars won't pass until it's too late. themodernnomad once nearly died of thirst in the Altiplano near the northern border of Argentina and Bolivia because he started walking towards Salta from a Chilean iron mine and went almost three days without seeing a car. 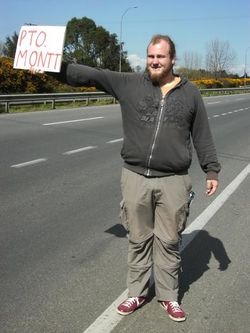 "Of all the countries I've traveled in the Americas, Chile was noticeably the easiest to hitch in (perhaps tied with México). Though unlike México, there is an abundance of personal vehicles in Chile. All of my hitching there was as a pair (one male, one female). Waits were hardly ever longer than ten minutes, regardless of the setting, even in the middle of the night on the side of a high-speed freeway." - jhoule

Chile is a wonderful hitch. I made my way for three months from Arica to Puerto Montt and onward down the Carretera Austral all the way to Cochrane (in summer months). After the jaunt in Argentina, I reentered Chile near Puerto Natales and the hitching was superb there as well. - Chael

I hitched around Chile for about two and a half months and found it to be very easy. The only problems you might run into is in the summer it seems like everyone is hitching and you might have competition with thirty other people in some obscure desert stop off. I've found the farther you are from Santiago the easier it is, the northern and southern third being great." - Jason G

I hitched from Santiago to San Pedro in June/July 2014. Contrary to the above, I found it easier to get rides near Valparaíso and Santiago. North of La Serena I was met with longer waiting times. -Keith