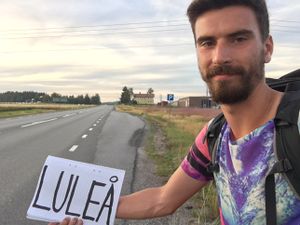 Usually I like to just use my thumb, but in parts of Sweden where drivers are going all over the place and heaps of people stop, a sign can help to avoid wasting drivers' time.

I'm a 21 year old guy from Sydney but living in Berlin.

I first discovered hitchhiking by word of mouth in Iran. While talking with other travelers about the locals' incredible hospitality, I was encouraged to finally hitchhike. The experience was naturally daunting, but it didnt feel foreign; I had previously backpacked around Ethiopia where public transport consists of overcrowded vans stopping to pick people up and drop people off all throughout the country side. Because of this experience I felt very comfortable 'hailing' a ride off the highway. Since getting picked up by a guy called Majit for the very first time I've never looked back, and now that I live in Europe I hitchhike every second month or so. I'm so thankful to have had the initial encouragement as now I find hitchhiking easier than any other form of transport and cannot imaging traveling by bus or train anymore, except when it's raining haha.

I prefer sticking my thumb out to holding a sign. This is because I never have solid plans and love saying "yes" when a local invites me to join them somewhere I hadn't anticipate.

I prefer being passive rather than approaching people. This is because I like being picked up by interesting people rather than relying on the charity of otherwise disinterested drivers.

For those interested I keep a blog which desperately needs updating.

Here's a map of everywhere (outside of Australia) I've slept! However, the only countries that I've hitchhiked in are Iran, Germany, Poland, Portugal, Spain, the Netherlands, Denmark, Sweden, Finland, Norway, Mauritania, Andorra, France, Slovenia, Austria and the Czech Republic, in chronological order.

These resources can be really useful for hitchhikers, but by using them we also have the opportunity to contribute to them for both locals and future travelers.

This list is tentative and chronological... I hope that it reflects the diverse members of society who were kind enough to give me a ride.