Oiseau is a person in Seattle, Washington, United States 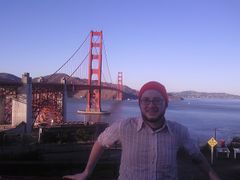 Oiseau taking a rest at the Golden Gate Bridge.

Ouiseau resides in Seattle's Capitol Hill neighborhood. He is active in the Couchsurfing community on Capitol Hill and in Seattle as a whole. He has traveled most of his life, but has only adopted hitching as a mode of transportation within the past two years.

He is also greatly into art, music, food, and film.