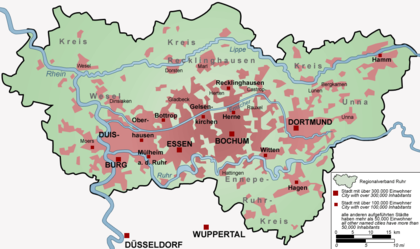 Altough, there is a very high density of motorways, hitchhiking there is quite tricky because of the maze of minor motorways. Major motorways in this area are the A1, A2 and A3.

Even worse is the fact, that there are almost no service areas or gas stations directly at the motorway, which means, no good places to get dropped of, and no good places to start. The service areas that are there can be found on the site of Tank & Rast, click anywhere between Bielefeld and Aachen for the detail map of the Ruhrgebiet.

Long distance traffic usually tries to drive round this area and this is what you should try when transiting, if possible.

When coming from the West, it is quite difficult to cross the Area. Resonable places are

Towards Cologne and the South

The A52 runs through Essen and Mühlheim and joins the A3 running between the Dutch border in the North and Cologne/Frankfurt in the South. There's a good on-ramp onto the A52 near the Essen/Mühlheim air strip, reachable by bus (to a stop called "Abzweig Flughafen"); with dense traffic even on Sundays. Take a sign saying A3 south. There's service areas before Cologne, so you'll have the chance to change rides there.

Towards the Netherlands (North-west)

Compare instructions to go to Cologne, just have your sign say A3 north.

Towards Bremen/Hannover, the North and the East

The public transport in this area is coordinated in a transport network (called VRR), which means that you can take any bus/tram/subway/supension railway/train (execpt IC and ICE) with one ticket. For about 9 euros, you can get a ticket to get from anywhere to anywhere.
Tickets for only one city are about 2,20 Euros.