Difference between revisions of "Puttgarden"

Puttgarden is Germany's gate to Scandinavia. There is a car/train ferry port with ferries to Rødby in Denmark.

In 2007, Germany and Denmark decided to build a 19 km long bridge from Puttgarden to Rødby, which is yet to be constructed.

Make sure to also have a look at the Rødby article. 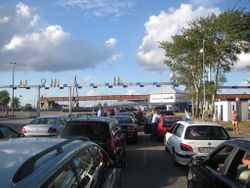 Cars and drivers waiting to get on to the ferry, great for finding a ride to Copenhagen or even far up north into Scandinavia

Usually hitchhikers can get over for free because every vehicle can take 9 passengers with it, so there might be place for you anywhere. If you are searching for a lift you should tell people about this possibility – otherwise they might not take you with them just because they think it's too complicated or they'll have to pay.

You can probably easily find a ride to Copenhagen or Malmö in Sweden. Also, the ferry passage for foot passengers is for free after 9PM! (as Scandinaïve was told by an employee) But this might be no option for you because it's comparatively hard to find lifts in Rødbyhavn. But you can also ask people on the ferry.

If you're coming from Denmark, you can try to find a car on the ferry that might bring you somewhere on the motorway. Ask everyone you can on the boat (first ask if they're driving) and if you're not lucky, one option is to stay on the boat to go to Denmark and then back, and try again. Nobody will ask you anything, this hitchhiker tried it for a few back-and-forths. If still not lucky, you will probably try to hitch a ride where all the cars are leaving the ferry. It's always a lot of cars at once when a ferry arrives and then nothing for the next 30 minutes. There is also a petrol station 1–2 km away, where you might be lucky, too.

Frixge: It is hard to catch a ride at the end of the ramp the cars use to leave the ferry, although there is space for them to stop. I waited about two hours and finally found someone who brought me to the drive-up in Burg. From there it was much easier to get to Oldenburg in Holstein / the ARAL service station onshore.

Hallihallå :Same experience here. There were 2 hitchhikers there before us who ended up taking the train after 3 hours waiting. We waited for 2 hours and then were lucky to get a ride from a couple who felt sorry for us so drove all the way to Hanburg. Definitely best to ask on the ferry, no cars stop when leaving.

Icke: Never left the ferry without a new car (you can already start asking in the queing line in Rodby), but in case you dont find a new car to your destination think the best thing is to ask to take you just off the ferry. The mentioned ARAL service station is just a few Kilometers away, before the first exit onshore (after the Island of Fehmarn). The road here is still single lane. So basically everyone leaving Fehrman will pass the station, often rather slow because of all the cars leaving the ferry. Therethe drivers will not be in the rush of leaving the ferry any more, and a lot of cars will add petroleum there since it is cheaper than in Denmark."

At night and/or if you're stranded:

It is difficult that someone will stop for you at night after they leave the ferry (especially as it's a crazy rush and probably in this case people who would otherwise stop, in this case won't). At night your best chance to get some sympathy and maybe a ride is to ignore the no-pedestrians sign at the exit side, and go try to talk to some truckers who might be there (if their blinds aren't closed). Some may be resting for one hour, others will stay the night. If they're staying the night you will have to find a place to rest. But read right next.

If you get stranded for the night then there is a wonderful place for you to crash. Look for a door near those gates where cars and trucks leave the ferry (the place you cross to go talk to the truckers). That door gives access to another door and then to a well-heated and well-lit corridor that has access to the police office as well as the Scandlines office. At the end of the corridor to the right there is a heater. Probably there will even be something on the floor for you to lie down. Just do it. Use your sleeping bag. Nobody there will find it strange, it seems to be common enough. Regulate the heater to your preference. If anybody asks, just say you're waiting for someone who's arriving in the morning. Nobody asked me anything. By the way, this was a trucker's suggestion who also gave me the next suggestion about trains.

Also, if you'd like to take the train for free and you don't feel guilty about it: at around 5.00 in the morning the first train leaves. With information from another person this hitchhiker took a chance and rode without a ticket, to Lübeck. And then in Lübeck this hitchhiker took the train to Hamburg. Verdict: as said by the "informant", there are no ticket checks in the first hours of the morning. Plus, if you're not a national, you can just ask for the invoice to go to your home and ignore it.

Frixge: When you want to get to Berlin, try to catch a ride before you pass Lübeck onto the A20, then A14 or onto the A24 (attention: there is the national road B404 which most drivers use to get from the A1 onto the A24, check googlemaps). If you are unlucky you ultimately can hitch to Hamburg and go to the Hörner Kreisel (at the end of the A24 in Hamburg) or a service station close to it.