Osnabrück is a city in Lower Saxony close to the Dutch border.

In Osnabrück the A30 crosses the A1 and the A33. It is possible to hitchhike directly North towards Hamburg, East towards Hannover, South towards Dortmund or West towards Amsterdam.

There is free Internet at the University Library at Alte Münze (a few Meters from Neumarkt near Saturn). Just go inside, there are computers with internet-access. You can get cheap meals at the Mensa (Dining Place at the University). There are two of them in Osnabrück: One is just behind the Osnabrücker Schloss, there they normally check if you have a student ID, but they also accept Id-Cards from other universities and even foreign Ids. The other one is a little bit out of town at the Westerberg (30 minutes walking from Neumarkt), there they control the ids not very often. 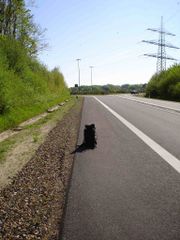 Ramp in OS-Nahne with hard shoulder.

Take bus 21 to Kreishaus/Zoo and get out at Osnabrück-Nahne. If you're not sure, ask the driver to let you out along the Iburger Strasse and tell him you have to go to the A30. The Iburger Strasse near the motorway is a two-lane carriageway. Here you have two options for hitchhiking:

Attention: There are two ramps for direction east! It is recommended to take the ramp which is on the street going south (when you're coming from Osnabrück), the ramp on the other side is smaller and there's not much space for hitchhiking, also the road marking is in a bad condition there. Have a look to the map for relevant information.

West towards Rheine Amsterdam, South towards Münster,Dortmund, A1

Take Bus 91/92 towards Hörne or Hellern and get out at Kurt-Schuhmacher-Damm. You see the motorway already before you, at the right the is a big Novo supermarket. You can stand directly at the begining of the ramp.

User:Platschi didn't found this place satisfiying, space to stop is minimal and during rush hour pretty dangerous for stopping cars. Nevertheless it's the best place to hitch west, just make sure you get into cars fast. First one on-ramp to go could be Ibbenbüren, which is perfect to continue further west and is much more relaxing.

For going south it normally takes half an hour, for going further on on the A30 it probably will be a little bit more difficult, but it is the best place in Osnabrück for going that direction. If you are going south: After 5 km the A30 crosses the A1, while along the A1 the first service station (Tecklenburger Land) appears after no more than 5 minutes, so you can also go with cars who go for example to Münster. Though if cars go to Münster, one could consider, dependend on the weather, to better get off at on-ramp Greven. There is a great hard shoulder and a lot of traffic going south to at least service station Münsterland or Dortmund.

Take the bus 81/82 towards Pye and get out at Bramscher Straße, or take the bus 41 towards Haste and get out at Bramstraße and then get back to the Main road (Bramscher Straße). Keep walking the direction away from town, after 300 meters you see a Coka-Cola company. Some meters more, after some redlights, there begins an expressway leading to the Autobahn. Just stand at the begining of the expressway, there is still a sidewalk to stand on. There is also a hard shoulder so drivers can stop, and the will see you while stopping at the redlight at the other side of the crossroads. Because you are not directly at the autobahn, you better make a sign. (You have to wait here, for going nearer to the Autobahn you would be on the expressway...)