Frankfurt is a major city in Hesse, Germany. It is an air, rail and road transport hub, so you will find many people travelling out of the city in many different directions. 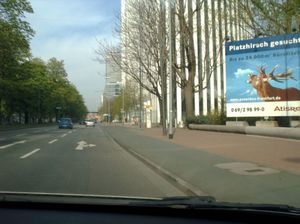 2nd option Take suburban train (S-Bahn) S3 (indicating: Darmstadt) to the stop "Erzhausen", leave the station and walk through the town Erzhausen on "Bahnstraße" and "Hauptstraße" westward until you can hear Autobahn A5. To reach Rastanlage Gräfenhausen Ost (northward, direction Kassel and Hannover) on A5 cross the fields lefthand before you reach the Autobahn. Check with GOOGLE-maps before you leave, the way is simple to find but not marked. To reach Rastanlage Gräfenhausen West (southward, direction Karlsruhe and Basel) stay on "Hauptstraße", cross the Autobahn via the bridge, walk lefthand through the forest on "Erzhäuser Weg" until the relais. It takes 50 minutes from the city center of Frankfurt until "Rastanlage Gräfenhausen". There is plenty of long distance traffic 24 hours a day at this spot, a restaurant as well as a small supermarket!

5th option To leave Frankfurt in the direction of Cologne or Ruhrgebiet westward - as well as Würzburg, Passau, Vienna or Munich (via Würzburg) eastward you should consider hitchhiking from "Rastanlage Weiskirchen". From Frankfurt DB main train station you should take suburban train (S-Bahn) S1 (indicating: "Rödermark Ober-Roden") to the stop "Weiskirchen". Wander through the town on "Bahnhofstraße", "Schillerstraße" and "Pommernstraße", later through the cropfields first in east- then in northward direction until you can see the Autobahn. There is two sides of "Rastanlage Weiskirchen", north and south. A roadbridge over A3/E42 (east of the station) connects both sides. From Frankfurt you can reach this place in around 60 minutes.

There are two good spots at the car park. Go to the arrival level in front of Terminal 1. You can now enter a throughway beneath the brownish Sheraton building that is opposite to Terminal 1 Part C. You should be able to spot the main car park exit. You can follow the cars further down some 100 meters to find a spot in the sunlight. Note that most traffic will go south!

Craig found it easy to get a lift south but rather tough to find a car going in direction north along the A5.