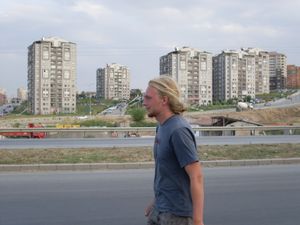 hitching out of Ankara in August 2009

I am a hitchhiker, teacher, noisy beer drinker and sometimes annoying blabbermouth and can mither you in German, English, and more or less in French and Russian.

After several year of Groundhopping and train travelling, I found out at the age of 20 that hitchhiking is just the best way to get arround and gives the best balance between adventure, cheap travelling and reliability. Till today, I hitchhiked more than 100.000 kilometers. Today I work as a teacher, and don´t have regulary time for hitchhiking anymore....

12.05.2005, 8 o´clock in the morning, petrol station Illertal. Destination was Hamburg, where I planed to be the next evening. In the end I reached Hannover in the evening, together with two other hitchhiking-girls, which invited me to sleep at their friends flat. Nobody told me hitchhiking is that fast...

Hitching throug the whole American continent one day.......don´t know if that will come true......

Longest lift (time): 3,5 days with a geological expedition in Yakutia

Maximum speed: more than 260 km/h during a race against another car between Dubai and al-Ain in 2006

Minimum speed: 6 hours at 35 km/h in an indian truck between Mumbai and Ahmedabad.