Take the metro line B (yellow) to the last station, Cerny Most, then continue in the same direction. About 10 minutes down the road there is a highway bridge. Pass under it and turn right to get on the highway. Continue until you reach the railway bridge and hitch just before it. The problem is, that people don't usually go that way if they are going north.

You can also get to an easily reachable gas station on the highway getting north walking. You must go to Letňanská (e.g. bus 186 or 233 from Palmovka). Then going down from the bus, you can see the entrance of the highway straight ahead. Put yourself so you have the highway on your right, then cross the street (going north then), and then the parkings, and go behing the buildings, looking for a small bridge ("most" in czech), going above the highway. From there you will see the gas station. There are not so many people stopping there, but they all are (almost) going in the good direction. Just ask if they are going north ("sever") or if they can just let you on the next gas station ("příští pumpa"/"prschieschtee pumpa"), where there will be normally more cars.

WARNING: If you are passing through Dresden, take a look on Dresden hitchwiki page.

From metro Zlicin (line B, yellow), take bus nr 380 or 308 to Rudna. From the village it's about 5-10 min walking to the gas station. Avoid going into Plzen or getting dropped off on the bypass. It's better to try to find a direct ride to Germany from the last gas station before Plzen.

From metro Opatov (line C, red) follow noise to the highway. Walk along the road about 5 min, keep going over the crossroad and the bridge over the highway (see second map). Now you might see other hitchhikers on the sliproad. Be careful and stay on the slip road, not on the highway (sometimes police passes by). Average waiting time is less than 1 hour. From the bridge you can see the gas station 'Újezd u Průhonic' - it's about 1.5 km by highway, but it isn't a good place. 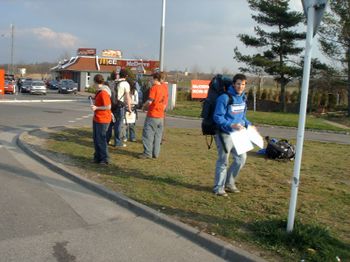 Hitchhikers at Újezd u Průhonic gas station. Regular local hitchers were about, as well as hitchers doing the race.

Use the gas station, it is a good place, easier to reach and you'll get rides quickly. From metro Opatov (line C, red) climb the steps to the highway. Look on the bus stop timetables for the stop "K Sukovu" on route 324, 363 or 385 (you are going south, the buses should leave every 15 minutes, and you can use the same ticket that you got on the metro). Get to K Sukovu - you'll know you're there when you see the gas station to your right. From K Sukovu the gas station is a 150m walk over the motorway bridge.

Tom shared this spot with about 20 other hitchhikers during a race in April 2007 (most started at the sliproad spot described above, but just got dumped at this gas station). While his teammates fell asleep on the grass for 3 hours (!), he was able to chat with other hitchhikers and drivers, and get ride offers towards Brno, Bratislava, Budapest, Vienna and Kraków. The average waiting time was 20-30 minutes, plus there were several truck drivers promising longer lifts after a few hours' rest.