From the main street, west of the train station (Slovenska cesta, Dunajska cesta), take buses 6, 8 or 11 in direction north. Get off at the stop "Smelt", at the "World Trade Center" tower. Walk further on towards the motorway, then right after the fountain. You will see the road forking, the left lane going down to the motorway, the right lane going higher up. Stand with your sign in the middle between the two lanes. Even though it might look a bit strange, this is the most common spot and it's easy for drivers to see you and there's enough space for one car to safely stop there.

Alternatively opposite of the railway station take bus no 27 towards "Letaliska" and get out at "Jarse". Continue following "Smartinska cesta" about 400 meters and turn to right from the traffic lights. There is a bus stop right after. Most of the cars passing now are going towards the highway. You can also take bus no 2 to "Nove Jarse" from Southern part of Slovenska cesta. The last stop is the mentioned hitchhiking spot. 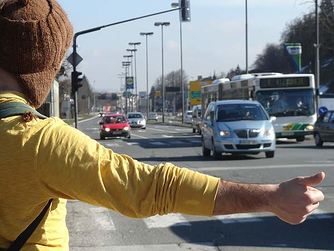 Direction north-west there is the motorway E61/A2 towards Kranj through the Karawanken Tunnel (Slovenian: Predor Karavanke) or over the pass over the border to Villach (slov.: Beljak) in Austria and further on on the Tauern-motorway to Salzburg and over to Germany. It is the way that is used by most of those numerous Germans that go to the Croatian coast for holidays.

This motorway E61/A2 starts from the Ljubljana bypass. The best way to join this motorway is from the street Celovška cesta, at the bus stop Šentvid. You can get there easily by taking bus number 1, 25, or 8 from the city centre in direction of Vižmarje. You can hitchhike at the stop, but make sure you have a sign. If people who pick you up don't go as far as you like, you can get a lift as far as the former toll station Torovo and keep hitchhiking there. From the city center (Dunajska cesta, Slovenska cesta) take bus number 6 or 6B in direction south, till the stop Dolgi most (last stop in case of #6), which is just after big crossroads with motorway signs, before the bridge above the road. Go back to the crossroads and you will see the entry lane into the motorway. There will also be an entry to a parking of a small house, stand on the side there with your sign (you will see where everybody else stands...).

If your destination is Venice or further, the easiest way is via Nova Gorica: use sign GO and ask to be dropped at the service area on the border. For Trieste it doesn't work well with TS sign - best option might be to use KP sign and then ask the driver to drop you off at Kozina exit (go right in the crossroads after toll booths). It's only 3 km from the border and on the main Rijeka-Trieste road. 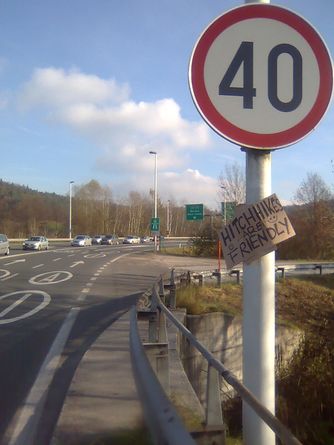 1. You can also try your luck at the service area "Barje", in direction of Zagreb. This service area is on the Ring around Ljubljana and is very well-served by a lot of long-distance drivers. To get there take bus number 1 or 1B in direction Mestni Log from the center. Go off one stop before last, called "Koprska". Continue straight (the bus takes a turn just before the stop "Koprska" - don't follow it, go straight on!) on the street Cesta v Mestni log, after 2 minutes you will cross a bridge over a small river. Continue straight and cross the motorway over the bridge, and on the left side the service area is about 500 m away. There is a golf course between you and the service area, which you can cross by climbing its fences (not too high) if the personal allows you, which hasn't always been the case. If they don't, you should take an immediate left directly after crossing the highway (you're still on the bridge at that point), descending to the guardrail. You are now between the golf course's fence and the highway, which is quite a narrow path at some points. After a few hundred metres, you'll get to the resting area. Hitchhiker Looking for Stu discovered that bus 1 will drop you by the side of the golf course at what appeared to be the last stop before returning to town. No problem hopping the fences and crossing the course away from the busy motorway edge.

2. You can go to the on-ramp of the motorway at the edge of the city. Not many cars go in this direction, and the ones that do usually do not enter the motorway here - this on-ramp mostly serves inter-urban traffic, so you might have to wait a lot of time. From the city centre (Slovenska cesta, bus stop "Pošta") take bus line 3 in direction of "Rudnik" (south), and get off at the final stop. In front of you there will be the motorway entrance, which will be a turn left. Cross the street and on the side of the on-ramp road, on your left, you will see a small asphalt surface where all the cars pass, and there you can stand and hitchhike easily.

If you really cannot get a lift out, the train is fairly cheap- eur 16.00 one-way to Zagreb and lasts 2.5 hours. Trains are scheduled at:

It is possible to sleep in the upside part of Tivoli park which is half an hour walking from the city centre. It is not so flat terrain, but if you search well you should find nice spots, clean, safe and quiet.

It is possible to sleep in Metelkova mesto (at the intersection of the street Metelkova and Masarykova) on the grass between Jalla Jalla Club and Tiffany Club.

It might be possible to sleep in the locker room of the train station, a policeman just comes in the morning saying "Wake up", but on occasion security people have entered and told that it's not possible to sleep there.

You could also sleep near the Sava River, it's a bit far from the train station, but it's unlikely that anyone will bother you. Take bus 19/19B till the north end "Tomacevo" and then take the road that goes down and turn right, you should get out of the city and pass by some farms and there you have the river where you can even swim if you have the bravery.

There is free "Wifi Ljubljana" everywhere in the center that you can request a code for by using your mobile phone number. Foreign numbers work fine as well.

Most of the coffee places also provide free wifi

You can also go to the Faculty of Arts which is on Aškerčeva 2. There are computers on the left and right on the ground floor but there are more in the basement. They don't have a password. They also have coffee machines were you can get a coffee (kava) for eur 0.25. (Nov 2010)

There is also a McD at the train station and in the city centre that as always provides Free-Wifi.

There is a market from Monday to Saturday at southern bank of river (vodnikov trg). It closes between 16:00 and 17:00 and there is always a lot of fruit and vegetables after the vendors. >> better check Trashwiki !

There is "Pizza Burek" which is a speciality from there, and a local made us taste the best seller in town, located in the Prazakova Ulica near the Bavarski Dvor bus station, for eur 2.30, it not the cheapest, but it's really really good. It's quarter a pizza with mushrooms, and lot of things in it, but you should definitely try it ! Note: The place is called Olimpia burek, if you are asking the locals.