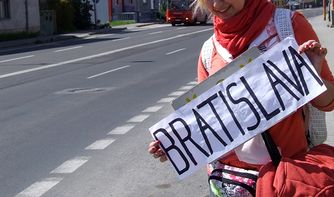 Another option of arriving at this service station is bus #30 which goes from Most SNP to the stop Pridánky (8 stops). You need to indicate that you want to get off the bus. When you leave the bus the service station is very close but not visible. Cross the street and follow the direction in which the bus continues for 100 meters and you will see the exit of the high and the service station on your left.
cyclebear tried this spot in june 2014 and recommends this spot but in case there is not many guests at the service station its good to show the sign towards cars on the highway as well.