Sidi bel abbes is a city in Algeria. Sidi bel abbes called SBA as well and Petit Paris (little Paris) sometimes , situated in the west of Algeria, 80km to Oran and 150Km to the Moroccan borders.

(NOT FOR TLEMCEN) If you want to go in direction of Oran, take bus number 28,22 from the city centre or from El Hofra, the bus goes all along "Route d'Oran" and the ticket coast 15DZD. leave the bus in Village Americain stop, here [1], it's a circle point and sometimes there is police checkpoint, use a panel is better because there is lot of people going to the villages near. Another possibility to arrive to this spot is take the tramways 30DZD from the city centre. Get off at the station Les Frères Adnane, there is a circle point with lot of traffic usually you will see it in your left of the exit door of the tramway, once the circle point in in front of you turn left direction of Oran "N13" it's about 10min to the spot. 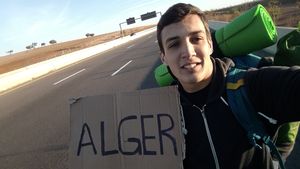 If you are going in direction of Algiers or Mostaganem it's the same spot but instead of using a panel Algiers or Mostaganem it's better to use Oran and ask the driver to drop you somewhere in the highway, better the gas station Tessala or the ring A1 , A. Once in the ring walk a bit in the highway to the side where cars are coming from Oran direction, it's a bit hard for them to stop because they go fast, but my experiences I always found cars in less than 10min. Be sure the first car who is going to stop for you in Sidi bel abbes will take the highway in Ain el Berd or you will have to ask him to stop in the middle way of N13 and walk to the gas station.

Take bus "Tessala" from El Hofra, ask the small office there at what time he will arrive, they can even give you the schedule. the ticket coast 20DZD, ask the driver to drop you in the entrance of the highway here [2], from there you can use a panel in your direction, better to don't do long distances because it's hard to catch a car.

There is another way to reach this spot by hitchhiking from the first spot above this option but instead of Oran direction, hitchhike in Rocade Nord direction. use your finger and be sure they will not ask you for money.

There is one bus I know who goes near by the spot, it's the bus number 14, and this bus goes from ROCHER to Medicine university by Rocode Sud so if you are in the city centre better to walk 20min to reach the spot than change buses. There is Beni Tala hotel, in front of it, the other side of the way there is enough space for cars to stop and enough time to see you, use a panel Saïda, if you want to go to Béchar it's better to go to Saida and from there before you enter the city continue to Béchar, and make sure to catch a direct truck going because it's desert and you can get stuck in the middle of nowhere.

Option 1: Take bus "Sidi Lahcene" from El Hofra for 20DZD, go to the last stop 'terminus' and then take the way 'Trig Bousen' till the circle point, it's about 20min walking. You can use a panel Ain Temiuchent as you can also use the number 46.

Option 2: Take the tramway to the last stop in direction of Gare routiere Sud. walk about 15min street to the Rocade, there is no side for people to walk so just go on the sand or you can even hitchhike this small part to reach the circle point. Stay next to the police checkpoint, use your finger is better to go only to Sidi Lahcene, first car will stop go with because it's the first village, from the village follow the first option. otherwise you can give a try from the police checkpoint hitchhike directly to Ain Temouchent.

If you want to go the mountains, there is a possibility to take the bus "Tessala" from El Hofra for 25DZD to this place [3] and from there use your thumb to go up. if you don't want to take the bus so you have to go to ROCHER and hitchhike from the beginning of the Rocade Nord till you will arrive to this place [4] and from here the first car will stop for you will go to Tessala.

Avoid to visit the city at night specially alone.

Pitch the tent is a really bad idea, there is no too much trees around the city. The lake is not safe at all at night because there is lot of drunk people. I was used to camp with my friends in Tessala mountains, hidden somewhere between the trees. Couchsurfing works pretty well in the city, not too much hosts but always available.

For any additional information, don't hesitate to contact me on Couchsurfing here [5]

The A1 in Algeria, also known as l'autoroute est ouest (East West highway), is the only highway in Algeria. With a length of 1216 kilometers, it connects Morocco with Tunisia from the extreme east of Algeria to the extreme west.