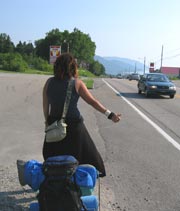 Quebec is the largest province of Canada and the second in population. The official language is French with its local dialect while English is in minority and more widely spoken by the border areas. English is known at a certain level by the population, most often by the young generation or the people working in constant contact with foreigners. Surprisingly as it may sound, for the majority of the population, English is rarely of daily use. The daily life, economical life are all lived in French and the size of the province has enable the fact that one can travel great distance without even having to speak English.

The province is bordered by Ontario to the West, the United States to the South (New York/Vermont/New Hampshire and Maine), New Brunswick to the South-East and Labrador (NewFoundLand) to the East.

Montreal is the main economical centre and the second city of Canada in term of population with a population above 3 milions.

The third biggest city of the province, Trois-Rivières, is located half way between Quebec city and Montreal on the north shore of the St-Lawrence, being another historic city that has mainly follow an industrial path in its development.

The cities and towns are usually well sprawled and crossing them can often be a pain if you are left at the beginning or downtown and want to avoid local traffic. As peripherical ways are usually inexistant, it might be worth (although not best) to try along to stick to the main commercial road crossing the town, usually trying up at the local petrol station.

The only illegal place to hitch in Quebec is on highways. Pedestrians are not permitted to enter (as you will notice by posts at the highway ramp entrance) or stay on the highway border in Quebec. As such, you may get a fine (about 120$ Can) if you are caught as a pedestrian on the highway border. Fortunately, most of the local policemen or provincial policemen are open-minded to the idea of hitching and understand that hitching directly on the highway is the best way to get a ride. So most of them will bring you to the next ramp, without the fine. You can recognize a highway with its 100km/h speed limit and the blue and red number post. It is legal to enter and hitch on "routes", speed limit 90km/h and green number post.

Apart from the Montreal Metropolitan Area hitchhiking is widely accepted in the province. Some local people also hitchhike short distances. The acceptance and ease of hitchhiking is related to the feeling of community in the area. Public transport is often limited and many people pick up hitchhikers in the countryside for a short ride to the next village. In more remote areas people might also act in the need and responsibility to help someone from the local community. Less to say that people might be surprised to meet a foreigner and quite flattered and happy by this sudden encounter as it is not an everyday event for most.

Long distance will usually end up being something exclusive to some major destination (such as Quebec-Montreal) or major highways as otherwise most of the destinations are not direct. This said, the scale of the country and perception of what is local and what is long distance might surprise people, 30km is a neighbour while up to 100km is still local.

Approaching people to ask for a lift is not common as standing with the thumb up is usually the main representation of searching for a lift, so many people might got surprised by the request. It won't be perceived as negative but just as simply uncommon.

Hitch-hiking a truck will usually be less common for the reason mentionned above, that the majority of the hitch-hiker are usually travelling short distance or heading into cities. Truck drivers usually stick to the main 'government numbered road' or highways and rarely adventures themselves into the cities. The uses of CB radio is well spread, therefore catching a ride with a truck driver could means that he can contact its surrounding to find you another lift further away.

This said, even if people are well receptive to hitch-hiker (elderly and women included), encountering red neck behaviour while standing along the road (ie. being yelled at, honked or fingered) will also happen simply as people are bored and you became an easy target to a prank. In another situation those very same people would probably react totally kindly and receptive if you would approach them at a service station.

The numerous provincial roads follows a grid pattern where the even number marks the roads heading East-West, while the uneven indicate a road heading North-South.

The main highway vectors are the A-20 (Transcanadian Highway) which goes East-West from the border of Ontario through Montreal until the border of New Brunswick passing on the south shore of the St-Lawrence river.

Highway A-40 follows the same path on the north shore of the St-Lawrence, going through Trois-Rivières and ends up in Quebec city. The connection between those two main highways can only be made through one of the few bridges crossing the St-Lawrence at few specific points.

This is possible either:

For a more exhaustive description of it see the provincial highway page.

Border Crossing to the United States

Look over Quebec for more details

Look over Montreal for more details

North America's oldest and only fortified city, the heart of the former French American Colony, surrounded by National Parks and Waterfalls to trek around for days.

The Mega Meteoritic crater area of Charlevoix has given a particular landscape of high mountains meeting the St-Lawrence, one of the first North American 'Cottage Country' area. One of Canada's top five!

Another majestic rural area where the Appalachian Mountain range start while meeting the sea, plenty of historical settlements and panorama.

Montreal's northern playground, with loads of trekking, outdoors activities and backcountry possibilities in a typical East Canadian Landscape, to visit during the Indian Summer!

Just East of Charlevoix, the picturesque area continues into this large fjord where whale watching is even possible from the shoreside.

Provinces and Territories of Canada