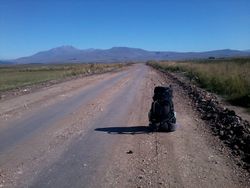 There are three open border crossings between turkey and Georgia. The faster and easier for hitchhike is the one close to Batumi. It can be very convenient for you even if you are going or coming from south east of Turkey.

Check Nomadwiki for info on accommodation, showers etc. or Trashwiki for dumpsters...and share your wisdom :) nomad:Georgia