Lebanon is a small country in the Middle East. It borders to Syria in the north and east and with Israel to the south.

Hitchhiking in the mountains and near/towards the beach might be quite easy, while hitchhiking inside cities (like in Syria) is definitely not possible. Avoid the taxi cars which are everywhere and most of them doesn't have a TAXI sign but all number plates designated for public transportation (taxi, buses, vans, etc) are red. Normal number plates are white.

As of 2010 passport holders of many countries enjoy visa free entry. There are three border checkpoints with Syria. One in the west of the country (towards Damascus) and two in the north.

Platschi recommends to take the Masnaa checkpoint, which in fact is much further away (if going to Hama/Homs or Aleppo), but also possible to hitch in one day from Beirut. If you're lucky (as many tourists are, as there are in fact not many traveling this checkpoint), officers might give you even a 30 days visa for Lebanon for free.

There is also a checkpoint to Israel, but it's not open. And considering the tense situation between the countries it doesn't like like it's going to be open to travelers any time soon.

Note that the border with Israel is closed - and will be for a while to come. Make sure you don't have any evidence of a past visit in Israel (e.g. stamp in your passport or books in Hebrew). When hitchhiking in Lebanon chances are high you will be picked up by someone from the Hezbollah. It's highly recommended to avoid mentioning any plans of visiting Israel. 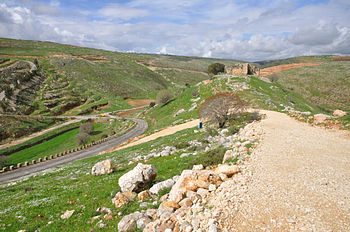 Hitchhiking in Lebanon is tricky and uncommon but doable. I was Hitchhiking with two other friends (all foreigners) from Saida to Jezzine and back. Many taxi cars so try to avoid those. Overall was nice, we got a very nice and english speaker driver and he took us to Jezzine. While waiting and trying to catch a car, many people were smiling or they made the "O.K." hand sign to us... I think most of them are like "Oh look, hitchhikers! So nice, they're so beautiful! Let's not take them". User:Lex404