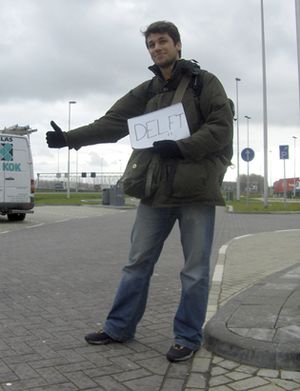 Mdsmendes, or Miguel Mendes, is a contributor to this wiki. Mdsmendes is also active on hospitality exchange networks such as HospitalityClub and CouchSurfing.

He was born in Lisboa, Portugal, and has lived there most of his life except for a small period in Barcelona So far he has travelled a bit through Europe.

Now living in Berlin, Germany as an Erasmus student and planning many more hitching trips!

After working during the summer of 2007 to raise money, Miguel travelled for a year in South, Central and North America. First of all he volunteered at an orphanage close to Rio de Janeiro, Brazil, called Casa do Caminho.

My longest wait was in France where I stayed at a gas station for 2 hours. Not much, I know.

Has hitchhiked in Europe and America. Total land covered? Around 27370 km.