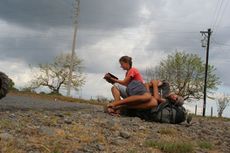 I wasn't so lucky, and the immigration official asked me for a ticket proving that I was leaving Panama. He told me to go buy a 25 dollar ticket from Panama City to San Jose. Instead I went into an internet cafe and made a fake ticket that convinced him I was flying back to Chicago from Panama City. Crashed at plenty of fire stations, and got a discount on a boat cruise to Colombia, but you can do better...-Chael777

In Panama is easy to ride, mostly all the pickup cars will just stop. And if you get sick of waiting for a ride all the buses will be slowing down near the place you try to hitchhike and invite you in, for a cheaper price.-Ajeremias

I had the same experience as Chael777: guy at the border (route 36 in Bocas del Toro) also refused to let anybody in without a plane ticket. Like Chael777, I was able to forge one on the computer in the internet cafe. Hitchhiking in Panama takes an hour on average, but for longer rides it's usually still faster than buses, which drive slower and stop more frequently. -Keith

Entring the country i was forced to show a ticket back to my own country, and a paper proving 500$ in my account. As the road system is very simple, with the PanAmericana crossing the country, and some secondery roads crossing verticaly, most the traffic will go same rout, however while waiting in those highways seem long going out of cities, getting towards them from smaller routs is almost too easy.-Aqua