Gjirokaster is a city in Albania. City located in the mountains in southern Albania. The famous dictator Enver Hoxha was born and spend his child hood here. The view for the Mountains and castle is beautiful and the old city which is located uphill has very picturesque white wall houses.

It is very easy. Go down to the main road, SH4, and walk northbound. Best is to walk around 500m away from the bus station which is next to the crossing of SH4 and Bulevardi 18 Shtatori street. This is to avoid stopping taxis and local trafic which you do not want. There is two gas station that give cars plenty of space to pull over.

As of July 2022, a new tunel connects the SH4 at Kardhiq bridge and Sarandë, cutting down the traveling time from the North of Albania to coastal city in the South. To take this way, follow the instructions of hithching out North of the city. If your driver does not go to Sarandë but further north ask to be dropped of at the intersection before Ura e Kardhiqit. A sign with Kardhiq might help as people often assume hithchikers go longer distances, however the drive to Kardhiq takes only about ten minutes. There is also a bus going there for 100LEK. From the intersection you will find a ride in no time, as all the traffic from the Albanian North towards Sarandë passes through here.

If you prefer taking the route through the mountains and maybe stopping at Syri i Kaltër (the Blue Eye), just follow the main street down south as far as you wish. After about three kilometres you will find a gas station.

It is not the easiest way. You can easily hitchhike to Tepelenë on SH4, however, the problem starts afterwards. You should ask to drop you before Tepelene, on the SH75 crossing (you can recognise it easily as there is a bridge). Usually not many cars go there, if so, they usually head to Përmet. In Përmet, everyone usually heads to some villages nearby or the Greek border near Çersovë. It is recommended to hitchhike without a board to catch short distance lifts. Few cars head to Leskovik and it is a mountain way. It is also possible that you will have to walk. If you were lucky to get to Leskovik, the rest of the way up north may be easier. Head north to Ersekë, and finally to Korça. It is a longer way than it seems to be as it goes via mountains. This makes it be, however, definitely one of the most beautiful in Albania. It is still worth trying, but get prepared. Start very early. Make sure you have enough food and water (useful if you get stuck in the middle of the way nearby Greek border or somewhere in the mountains) and it is better to have a tent in case you don't make it. 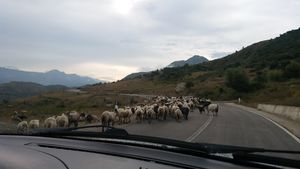 Scenery on the way to Leskovik
Retrieved from "https://hitchwiki.org/en/index.php?title=Gjirokaster&oldid=103112"