It's hard to hitchhike on trains. But there are ways to get free train rides.

If you're in an organised hitchhiking competition... 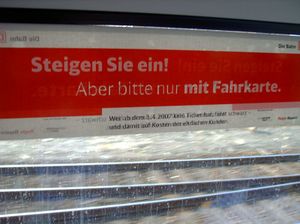 Photo taken while hitchhiking a train in Germany. Translation: "All aboard! But please only with a ticket." ...heeheehee.

...then it is very possible. Choose your train and wait at the platform. When the train arrives, work out who the conductor is and run up to him/her. Explain your situation (using an 'international language' such as English often works best, often better than speaking the conductor's native language), show them some documentation for your competition and don't be afraid to beg. Telling a story about a dangerous experience two hours ago on the roadside (true or not...), and how much you want some safe and secure travel after the traumatic experience, works well. By this time, the train is now running nearly a minute late and there is a good chance that the conductor will say Yes, because he needs to end the conversation and keep the train moving. So get in, sit back and relax :).

Tom and his two team-mates tried using this trick when travelling through the Netherlands and Germany on Sheffield University's 'Bummit' hitchhiking competition. 9 out of 13 conductors we asked said Yes, and let us travel as much as we needed on their trains. It didn't work when the train was either crossing an international border, or it was a high-speed train, or the conductor just didn't want to bend the rules...

In the United States, train hopping is still quite popular. In many states it's easier than hitchhiking.

Looking bad, smelling bad, having no luggage, hopping on the train last are the things that can instantly attract attention. If you really cannot do anything about your suspicous appearance, it's best to note when your train is coming and take a walk, instead of waiting at the station. If there is somebody standing at the entry to the platforms looking whether everybody is validating tickets, see if there is another way to get there - such as getting over a fence. You have to look where the inspector is - at the start or the end of the train - go to the other end. If you really don't know - sit in the middle of the train and keep an eye for the conductor. When he's coming, run the opposite direction. You can hide in the toilet if it's possible to close the door without locking it. If the inspector is checking tickets at a particularly long stop, the toilet is your only option not to get caught. If you made it to next stop, there is no reason to get out instantly, the conductor in most cases is going to get off the train while the train is standing in the station and you can run to that part of the train which the conductor has already checked. If caught, deny having money or an ID. When choosing which train to take, opt for express trains - those with fewest stops, as you are unlikely to get far with regional ones - and you may get stuck in a station where almost no trains stop. It's very useful to memorize (or write down) the timetable, so that you instantly know which is the best train to take after you get kicked out of the previous one.

In Belgium you can get fined for not having a ticket, or not using the one that you have correctly. Taking a train from Chaleroi to Brussels, a conductor issued a fine of 72 euros for a 12 euro journey, all because the details of the trip (a 10 journey pass) where written in pencil and not in pen. Be careful.

Regional trains are very bad, sometimes they're checked quite heavily, and, since they have so many stops you are unlikely to make it anywhere. There are non-Thalys TGV trains going to France from Brussels, although it may not be that obvious at first.

TGV trains are best, TER trains are the worst, others are tolerable. South of Paris the police are liberal and will only write down your name, birth date, etc., north of Paris you can expect to get arrested and have serious trouble if you really have no ID. If you don't mind a fine written to your name, the conductor will allow you to continue your journey with the same train, whether on a TGV or a TER train.

It is quite possible to speak with the driver and the controller before the train start and tell them you want a ride for free. Some of them are kind enough to let you in. Bikepunk got better luck with TER than TGV with this technique so far.

Mipplor have hitchhike train from Luxembourg to Nancy,Lyon,Marseille,Monaco,Nice,Perpignan in Oct 2009. Actually 1/3 of his time was spent in the toilet to read newspaper.he was so lucky dog that no single inspector came to trouble me .Because of his occupation, one French guy got so angry to hold for so much time of his waste.

Germany is great for riding the trains for free. ICE and IC are the best trains (with fewest stops). There's always two conductors on them. They are pretty pedantic about checking tickets, so it's pretty unavoidable to get caught. Once you're caught, however, you'll simply have to get off at the next stop. Sometimes they'll ask you to show your passport or remind you that you can buy a ticket on the train. They'll never call the police or give you any fines. The regional trains are not that bad too, they are lightly checked. The trains go all night (unless you're somehow stuck in a very bad station), so they're a great option when it's too late to hitchhike. Taking the very small train from Aachen to Liege (Belgium) is a very big mistake, you will get kicked off in a small village far from any main road and you will have problems getting out of there.

Fines don't exist, the conductor checks only a few times during a trip (even on those very small trains), and if he finds you without a ticket, he simply kicks you out, although some are nice enough to let you ride for free. An exception is Eurostar trains, they have police on the train and will ask you to pay, although you can still get away with it. The night train (InterCity Notte) is the best option for making long distances, as after midnight until after about 8 am nobody is checking tickets.

The local trains (CFL) have two floors; be aware that there is a ticket booth at the end of the first car - don't accidentially run in it, unless you want to buy a ticket. There are ticket inspectors too. If you want to get of the country, be aware that the inspector will check tickets on the international train as soon as it departs, so, if the next stop is still in Luxembourg, you're screwed. The cops are not liberal.

It's insanely easy to hop trains in Norway. When I went to Norway I found it rather difficult to hitchhike, so instead I resorted to abusing Norway's "Ubjent" train system to get me around the country. I managed to train hop from Vestfold (south west Norway) to the Swedish border using just free trains! Go to whatever train station, even if it's Oslo central station, size doesn't matter, and look for trains which are going local. For example, Oslo - Ljan (a tiny village not far from Oslo). These trains will usually be red and old looking, and every 2nd carriage will have "Ubjent" written on the outside doors with a small message (in English) saying that you must have a validated ticket before entering as there is not a ticket inspector (!). This essentially means buy a ticket and get it electronically stamped before entering, but of course, no one ever does this. Just hop on to this carriage and keep going with it until the line runs out. From there, you can get another local Ubjent train until that line runs out again! Keep doing this until your destination. Like I said, I managed to travel from Tonsberg to Holden, about 250km, using this method.

There are many different types of trains (Cercanias/Rodalia, regional, regional express and Catalunya express are obviously the worst, as they have the most stops) and you have to be aware of the fact that depending on where you are, trains may not go frequently. The conductor may either check the whole train several times or after initial check rely on his memory to see who has just hopped on the train or he may have a list. He doesn´t get off the train while checking, so you can jump off the train and jump back on on that part that he has already checked. Trains have only one inspector, even if they are composed of two parts between which you can´t walk. They don´t call the police if you refuse to pay or show a proof of identity, you simply have to get off at the next stop. White timetables (those showing trains going between two locations, not just those stopping from a particular station) list only regional trains - well, in case, you´re wondering why there are so few trains listed. Trains seem to have only one toilet, if any. In bigger cities (Barcelona, Castellon, Valencia, Alicante, ...) and in many smaller cities which may be even worse since there is less people and security can easily notice you it seems to be the rule that you need a ticket to get to the platforms. Sometimes you need a ticket to get only to Cercanias/Rodalia trains, sometimes only to express trains, sometimes both. If you are kicked out of the train, security may kick you out of the station too, so sometimes the only option is to hitchhike. When leaving Barcelona, take any Rodalies train to Passeig de Gracia where all trains going from Estacio de Franca south and from Estacio de Sants north and Rodalies trains stop at the same platform - that is, there are two platforms for each direction, you don´t need a ticket to go between them.

The regional train (S-Bahn) is great (it even goes out of the country), it has A LOT of stops, which means that you can easily jump off. If it has only one floor then you can see the inspector from a large distance, which is helpful. Sometimes there's only one inspector, or, if you get less lucky, several. Other trains are bad; the inspector checks tickets several times during the trip - by memory or, sometimes, by asking out loud who just got on the train. The cops are not liberal.

For short journeys, the UK is fairly good for fare-dodging. Quite a few young people get away with not paying fares, partcularly when the trains are busy (e.g. at rush hour). Many trains have no inspectors, and rely on entry/exit barriers to validate tickets. Often these are unmonitored, so a quick hop can get you in. They are often open after 9pm(ish). It is increasingly popular for train operators to have standard fines for people caught sans-ticket. These vary from £10 to double the full adult fare (which is a lot!). A good tip is to look out for 'Permit to Travel' machines. These are designed for people who for whatever reason can't but a normal ticket - the idea is that you buy a Permit to Travel with whatever money you have, then pay the difference later. It shows a general willingness to pay for a ticket - this means that you can escape any fine, so long as you have ample money to pay for a full ticket if caught. The minimum you can put into a machine and get a Permit to Travel is 5p, which is a pretty cheap price to avoid a fine.