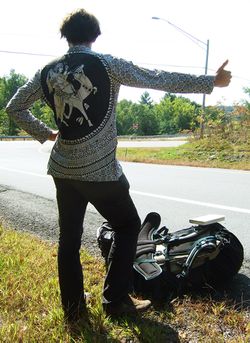 Hitchhiking in North America has a long tradition. Though in recent times it has become harder. In some states in the United States (such as Idaho or Kansas) the police are really harsh on hitchhikers, some others, like Oregon and Missouri, where it's even legal to walk on the freeway, are really friendly though.

Hitchhiking in the United States, Canada, and Mexico is easy.