Difference between revisions of "Laos"

Laos is a country in South East Asia surrounded by China, Vietnam, Cambodia, Thailand and Burma. Hitchhiking is fairly uncommon, and sometimes people will expect money. Check out the Thai-Lao phrasebook for language pointers.

Hitching in Laos is very different between the north and south part of the country. While in the south it is relatively easy to hitchhike 300 kilometers a day and people don't commonly expect money, in the north it's hard to go more than 150 a day -- on some roads, expect to cover only as much as you can walk in a day. It can take a long time to be picked up, as few cars drive on the so called 'highway', often just a dirt road with random pavement sections. Looking at the amount of cars (in January 2011 and 2012) there are around 1 (pick up, car, truck) per 6 minutes. This makes travel in Laos very different from hitching in Thailand. But even in the north it is still possible to get a lift. Solo hitchhikers can get a ride between villages with one of the many motor bikes that roam all over the country Near the border with Vietnam, on the road 7, there are many logging trucks, coming from China. They speak no English most of the time. Try the pickup trucks and point that you want to sit in the back. It helps to say in advance that you have no money and it can also be a good idea to have a local person write down a few sentences like "have no money", "short distance is ok" etc. There are more than a few improvised pickups that will give you a ride for less money than the organized busses. sometimes it seems cheaper to go with these pickups as out of 10 hitches, you need to pay 3 of them if you don't make clear in advance that you're looking to travel for free. [rule of thumb: 30-40,000 kip per 100 km for a "hitch", or 10,000 per person (per 30km) for a bus-truck.

Still, if you are determined to hitchhike for free through Laos, it can be done, even in the north (the south is very easy, similar to Thailand). Since almost nobody can speak English, and they will expect a payment for the rides, it is essential that you make yourself understood: a hitchhiking letter may help a lot with that, and will also help you to be helped by the locals in order to find free rides to your destination. Aside from that, be prepared for the long waits (or walks), have lots of patience and do it mostly for the fun!

In the '80s a lot of people went to Russia for their studies, and these are often people who have cars these days, so you might be able to use your Russian skills. English is not very common outside of cities and tourist destinations.

You should be aware that some maps of Laos (Google Maps in particular is one) are not accurate.

It is illegal (?) to sleep outside in Laos as the government wants tourists to spend their money on guest houses. Don't overly worry, however -- Zenit was woken up by police once when camping in plain view on the road and only had his passport details taken. On many more occasions nobody bothered him. As in Thailand, also in Laos it is possible to sleep in Wats (temples), but due to government tourism policies it's all much less certain than in Thailand. As in hitchhiking, the further north you get the smaller your chances get to find a place to sleep in a temple. 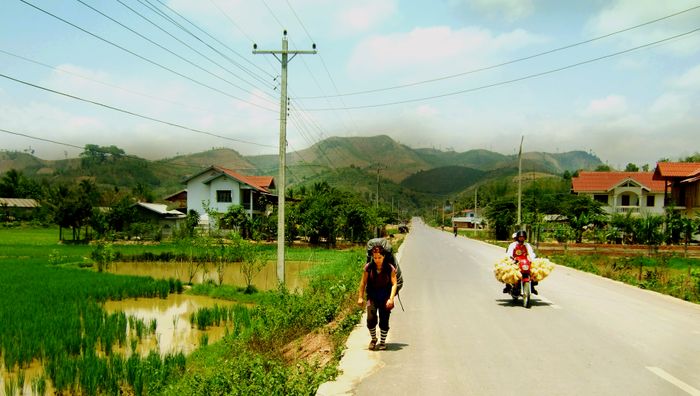 Amylin hitchhiking out of Luang Nam Tha to the border between Laos and China.

There is only one border crossing at Mohan - Boten. It is possible to walk from the Chinese to the Lao side. If you get stuck in Mohan and need to spend the night, accomodation costs 40-60 yuan but there are some empty shops, open building entrances with space to hide under the stairs, and RovingSnails walked to the top of an apartment building and slept on the rooftop without any complains.

From Thailand. There are 8 land border crossings.

Border crossing at Chiang Khong - Huay Xai. Walking or cycling across the friendship bridge joining Thailand with Laos is not allowed, but it is possible to hitchhike if one ignores the comments from the bus service (20 baht). From Thailand to Laos, the border police kindly stopped a car for RovingSnails and even gave them water for the way under the sun.